There is this song that is trending on Instagram these days, it goes like - “Dekhu me tujhe ya dekhu kudarat ke nazare…”. Surely the lyricist hasn’t been to Sikkim.

It all started in March. I had put in my papers and had decided to take a break from work. It had been a while since my last long trip, so I was itching to travel. Initially, with a few friends, I was planning to go across North East India in a Camping Co van, but that did not work out. At the same time, Shekhar was also looking for a workation, so we decided to go to Sikkim together. The weather forecast wasn’t encouraging with rain forecasted for almost every day of our trip. But we decided to try our luck and booked flights to Bagdogra.

I started looking at hostels in Gangtok. I really liked mixed dorms of Tag Along 2.0, particularly the skylight. The hostel had plenty of seating area and good views. But since it was a bit far from central Gangtok, I was hesitant to book. We sat on the options for a couple of days till most of the hostels started getting booked up for our dates. So we went ahead and booked Tag Along 2.0 for a few days. It turned out to be a great hostel.

I was somewhat nervous when I left Mumbai on 13th May. It had been more than 2 years since I had been on such a long trip. But as soon as I entered the flight, I was super excited. It didn’t matter that I had a 5+ hours long layover and got the least comfortable seats for both legs(last row, non-reclining, no window), I was too excited for all that. I reached Bagdogra in the morning and met Shekhar there. I was meeting him after 2 years. He had gained a lot of muscles, and I had lost all. We had discovered Wizzride through our hostel. We booked a couple of seats on that instead of figuring out SNT bus or a local shared cab from Siliguri. There were still a couple of hours for our cab to depart and the lounge food we had gorged on before boarding our flights had already been digested, so we found a nearby Dhaba and had breakfast. 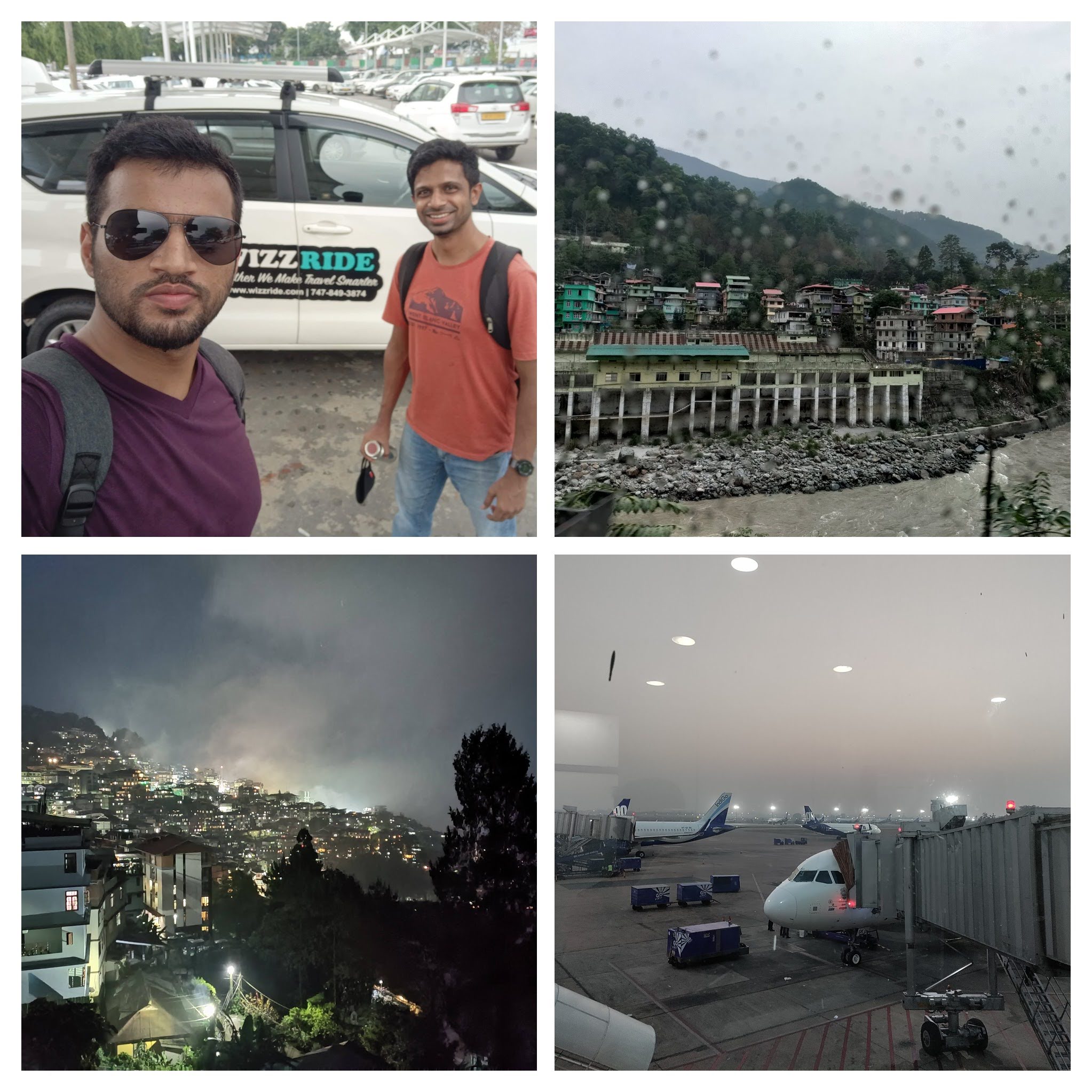 The ride to Gangtok was uneventful. We chatted with our co-passengers a little and caught up on sleep. It was drizzling outside. Mountains of northern West Bengal and Teesta river flowing alongside the road offered good views. We stopped for lunch on the way plus there was some traffic jam so we got late and reached Gangtok around 7PM. Our hostel was still 2+ km from the dropping point. Not the ones to shy away from lengthy walks, we started walking with all our luggage. The last couple of hundred meters didn’t even have a paved road, and there were no streetlights either. We somehow managed to locate the hostel. It was almost empty. We checked in, had dinner, and called it a day.

Next morning we were greeted with amazing views from the hostel. When we checked in the previous night, we could sense a valley-like open space and big mountains on one side of the hostel. We didn’t imagine it to be this beautiful.

After soaking in the views and breakfast, we decided to rent a bike and explore Gangtok. We took a shared cab and reached MG road. From there we found a nearby rental shop through Google maps. They had run out of bikes and directed us to a RideOn shop nearby. They also didn’t have any bikes, but we got the last scooter they had, a TVS Ntorq 125. Just a few seconds late, and that would have gone too.

We headed straight to Tashi viewpoint and filled up the tank on the way. We passed many tourist attractions but decided to visit them while returning. Tashi viewpoint was a huge disappointment. People usually go there early morning to view Kanchenjunga but it was cloudy when we reached and the place was packed with tourists. It was so bad that we didn’t even click a single picture and got out of there as fast as we could. We decided to ride along the North Sikkim Highway for some distance and see what was there. We went till the TVF tripling point and clicked lots of pictures along the way.

On the way back, we had some momos and coconut near the Tashi viewpoint. We skipped a waterfall on the way as there were too many tourists and stopped at the Plant Conservatory. There were a lot of tourists here as well, but the place was huge so there were pockets of quietness. There was a nice waterfall too. We wanted to go to the Ganesh Tok next, but it was so overcrowded that we skipped it and rode to the Hanuman Tok. That was a nice uphill ride. Since it was cloudy, we couldn’t see much from the Hanuman Tok but at least we could stroll around and relax a bit. 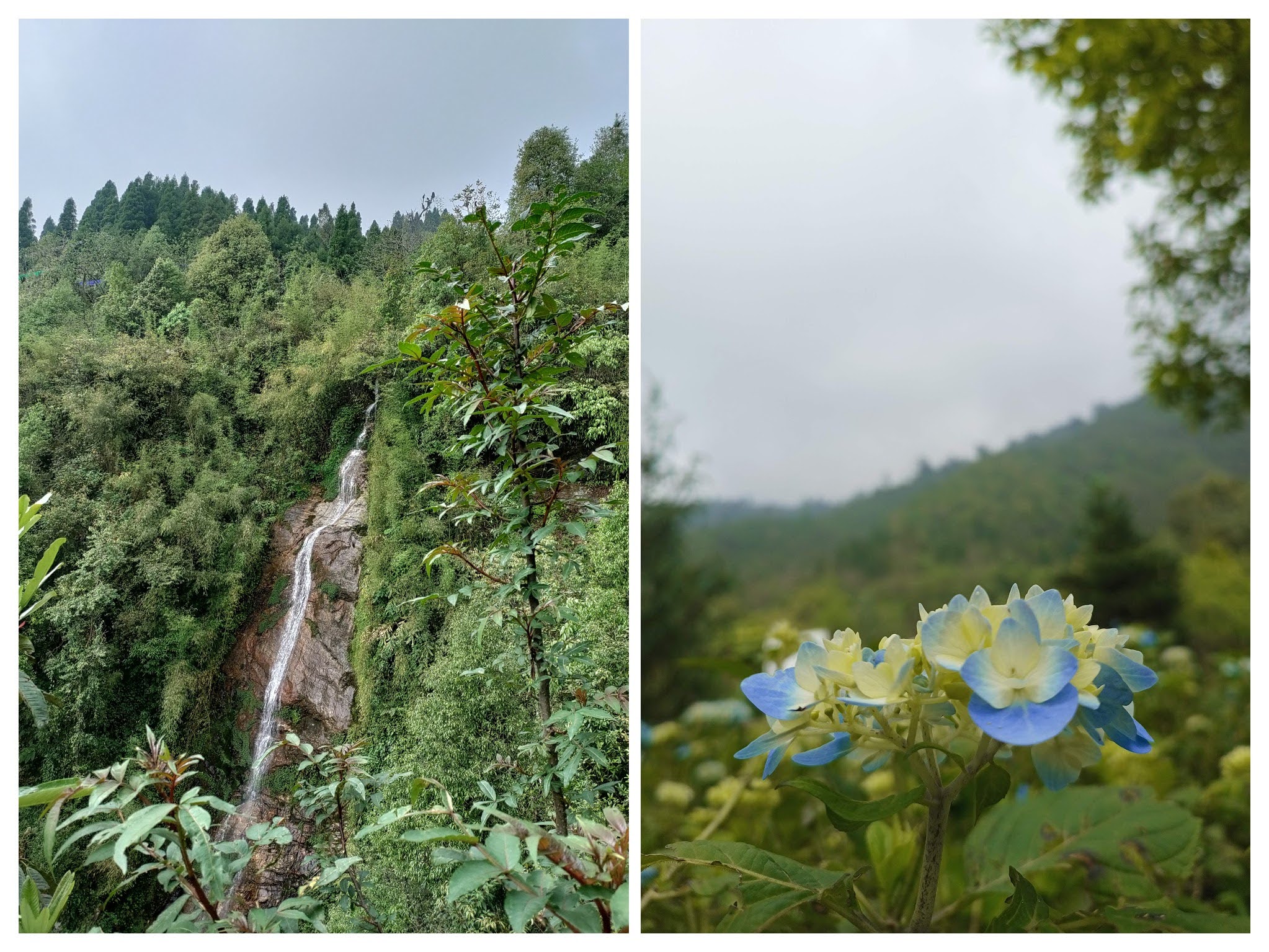 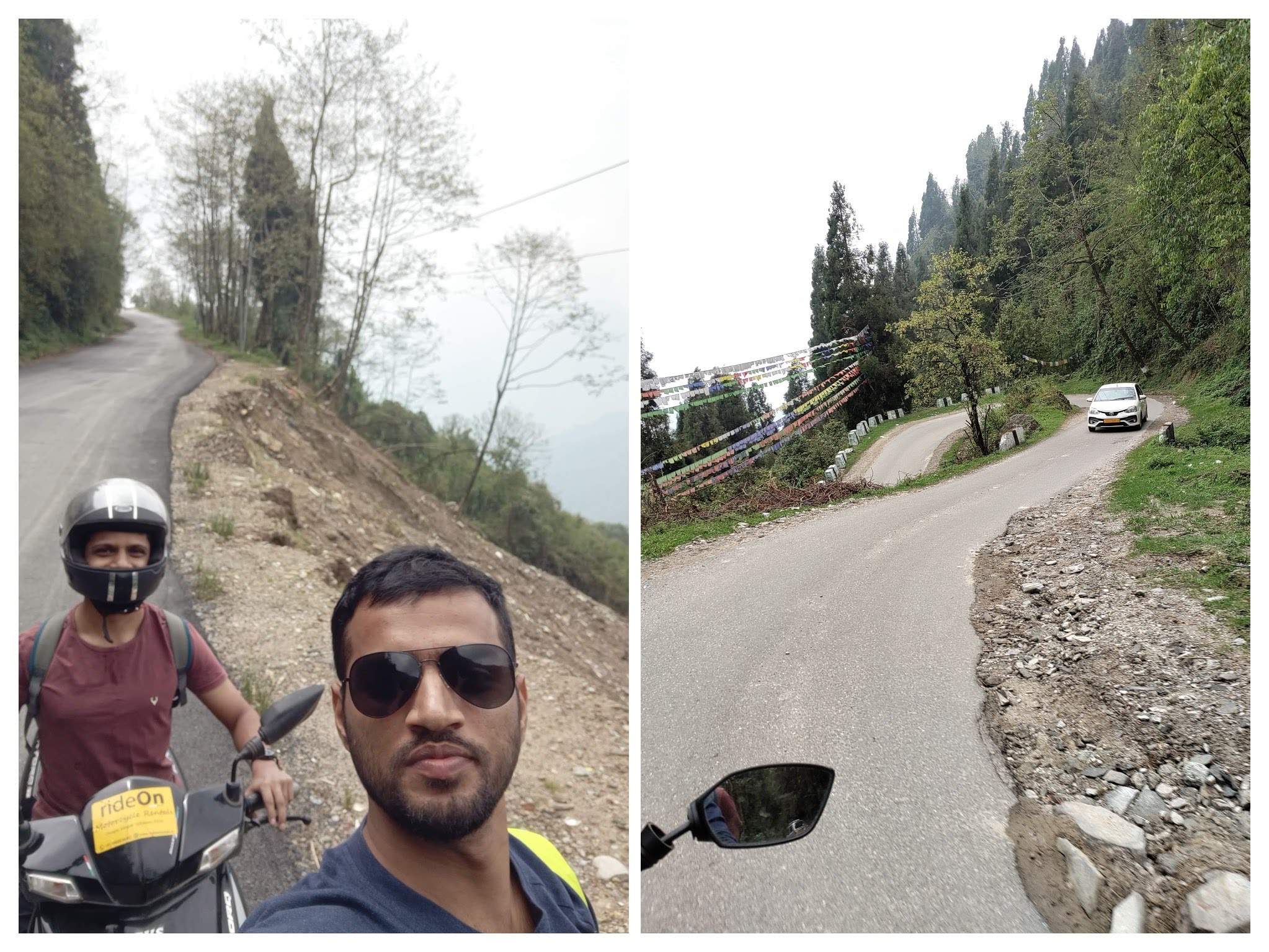 By the time we left Hanuman Tok, it was already 2PM and we were hungry. We decided to try out a Tibetan restaurant - Kundey, from our hostel’s recommended places to eat. While on the way to the restaurant, we realized that Enchey Monastery was nearby so we took a little detour. The monastery was so peaceful! There were hardly any tourists. We strolled around, took photos and even meditated inside the prayer hall. 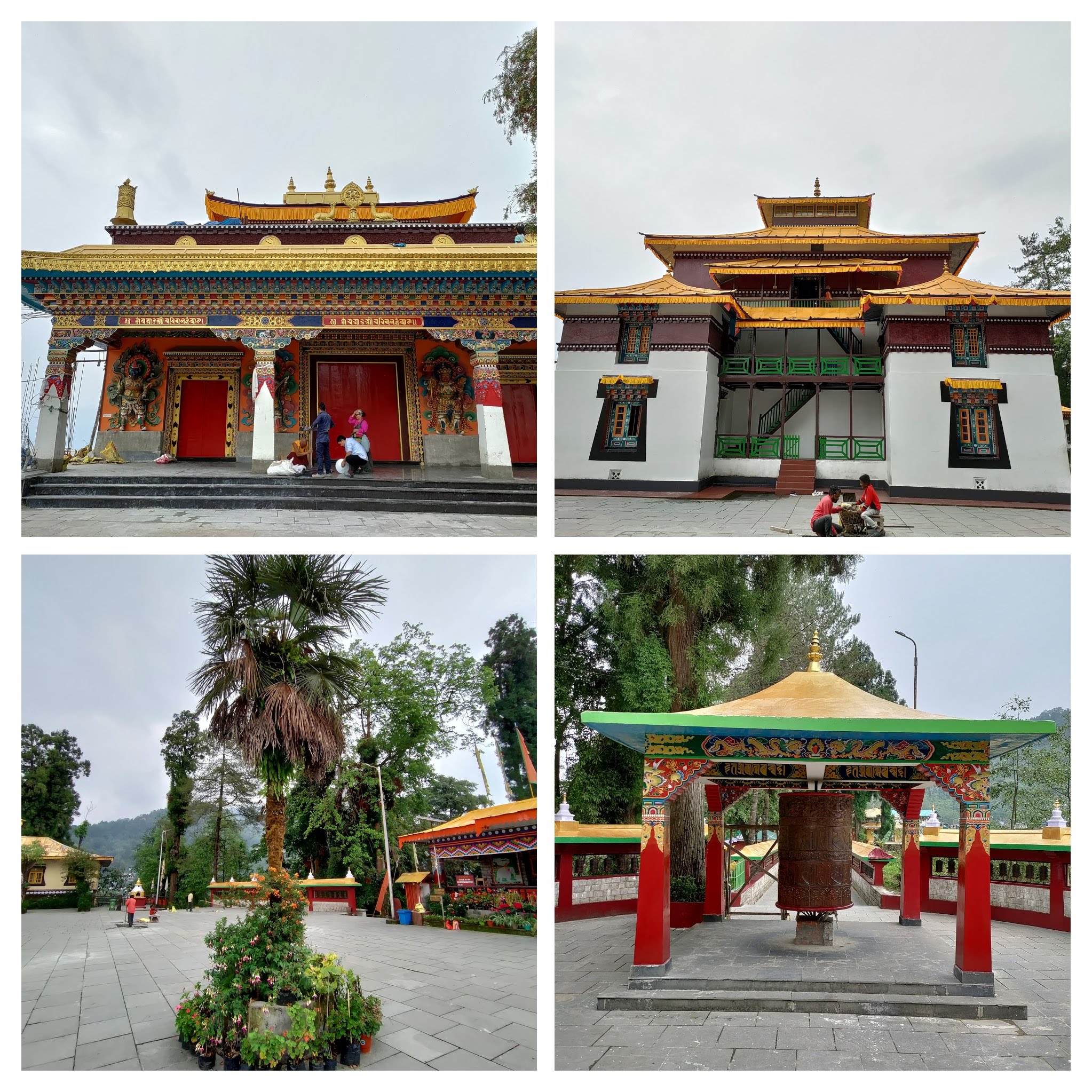 We finally went to Kundey. It was a small family-run restaurant. It was on a level below the road and didn’t even have a proper board. But the food there was real good, and the window seats offered beautiful views of the opposite mountains. 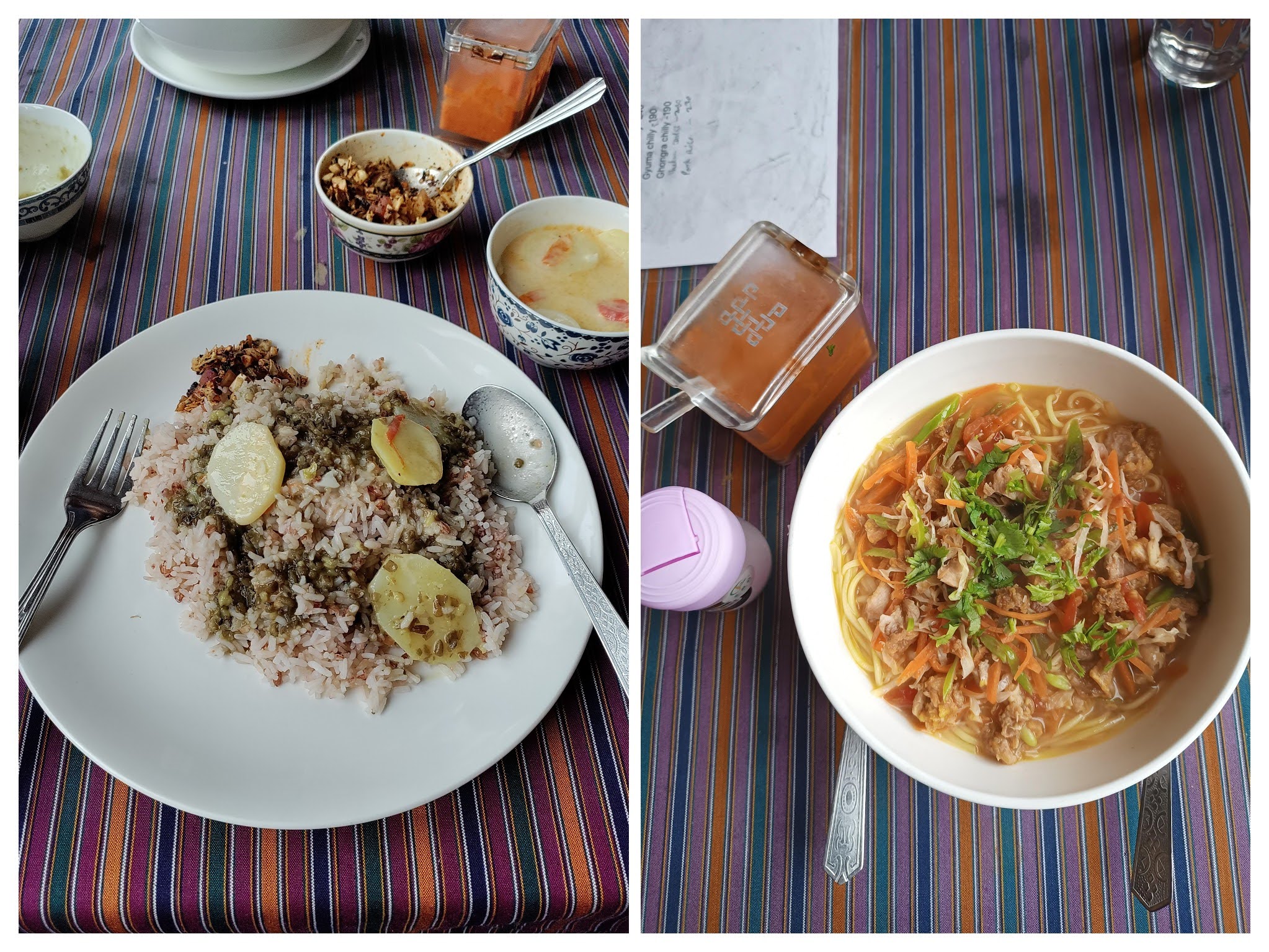 It was almost evening when we left the restaurent. We still had some time left so we decided to visit Ban Jhakri falls. There was a diversion on the way, and when we took it Google maps gave up on us and led us to a dead end. We followed other cars and ended up on a familiar road. It had started drizzling and was getting dark so we chucked the plan, returned the scooter, and walked back to our hostel.