Rain and a fully booked hostel

The next day was tough. It was cloudy, and it rained almost throughout the day. Shekhar was going to work throughout the week and we were planning a bike trip to North Sikkim that weekend. But it seemed like our plans would go for a toss. I even checked if we could leave Sikkim and go to Himachal/Uttarakhand. To make things worse, we had booked the dorms till that night only, and the hostel was fully booked the next day. I started looking at other hostels in Gangtok, but all the good ones were booked. Eventually, Shekhar went down and sorted it out. They agreed to add extra mattresses in the common space for the two of us for a night, then we would spend the next night in a private room, and the following two nights in another dorm. Thus we would end up staying all over the hostel that week. That became the theme of our stay (and of all the people who stayed in that hostel for long).

The next day the weather gods shined on us. It was sunny in the morning. I decided to make use of it and set out to explore MG road - the heart of Gangtok. I roamed around there and in Lal Bazar. Once bored, I checked Google Maps and found Namnang View Point. I walked there through a series of stairs and entered the walkaway from the remote end. It was empty till I reached the actual viewpoint. There was one noisy family clicking selfies. I loitered around till they left and then spent some time there. I got out of the other end of the walkway and found Gangtok Ropeway. It was cheap, so I decided to give it a go. The ropeway offered good views of the surrounding hills and was fun. 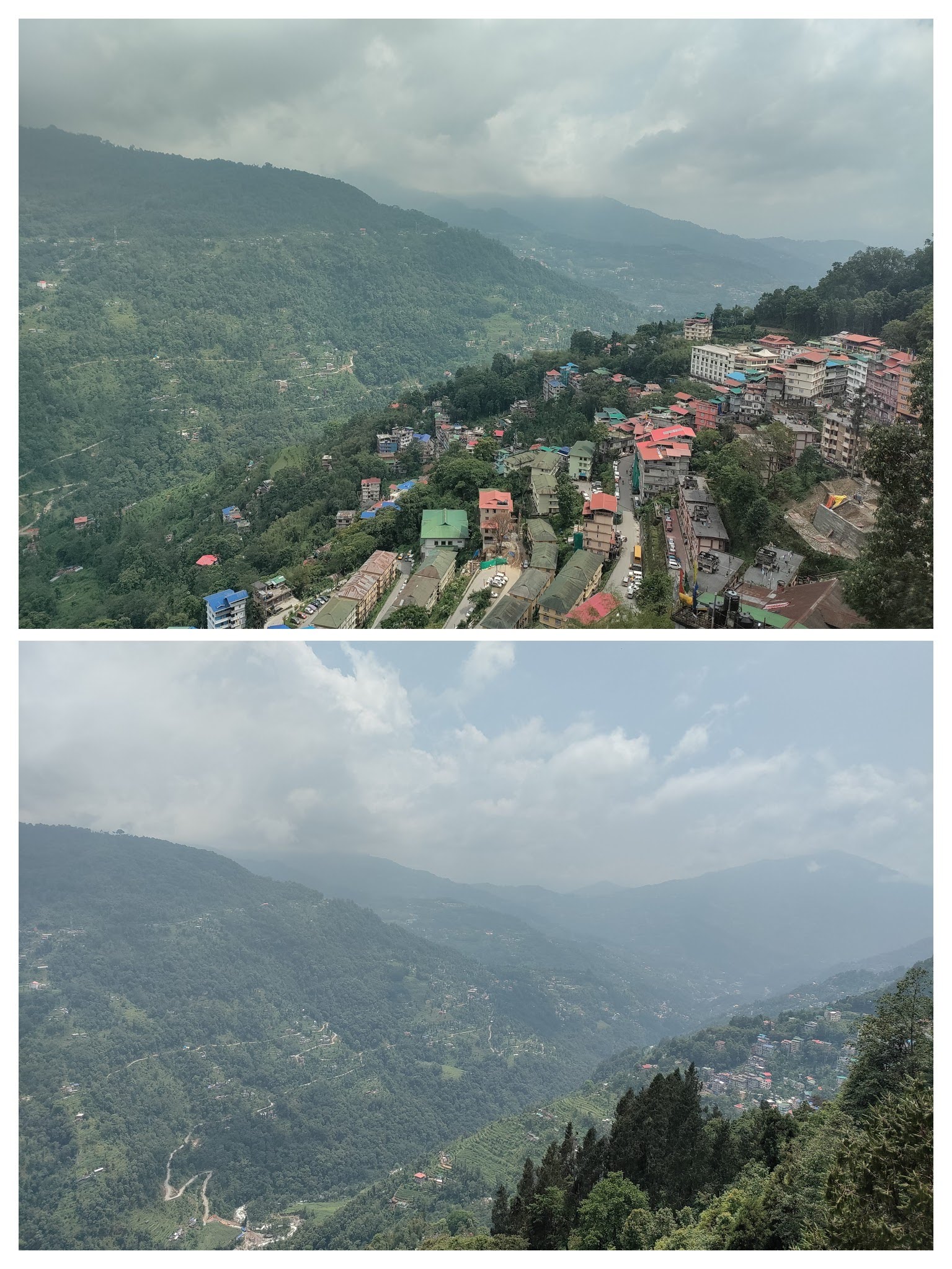 It was already lunchtime and I was supposed to have lunch at the hostel, so I started moving toward MG marg. On MG marg, they had some function for Sikkim state day and there were dance performances by representatives from all the northeastern states. I watched a couple of them and reluctantly left for the hostel. 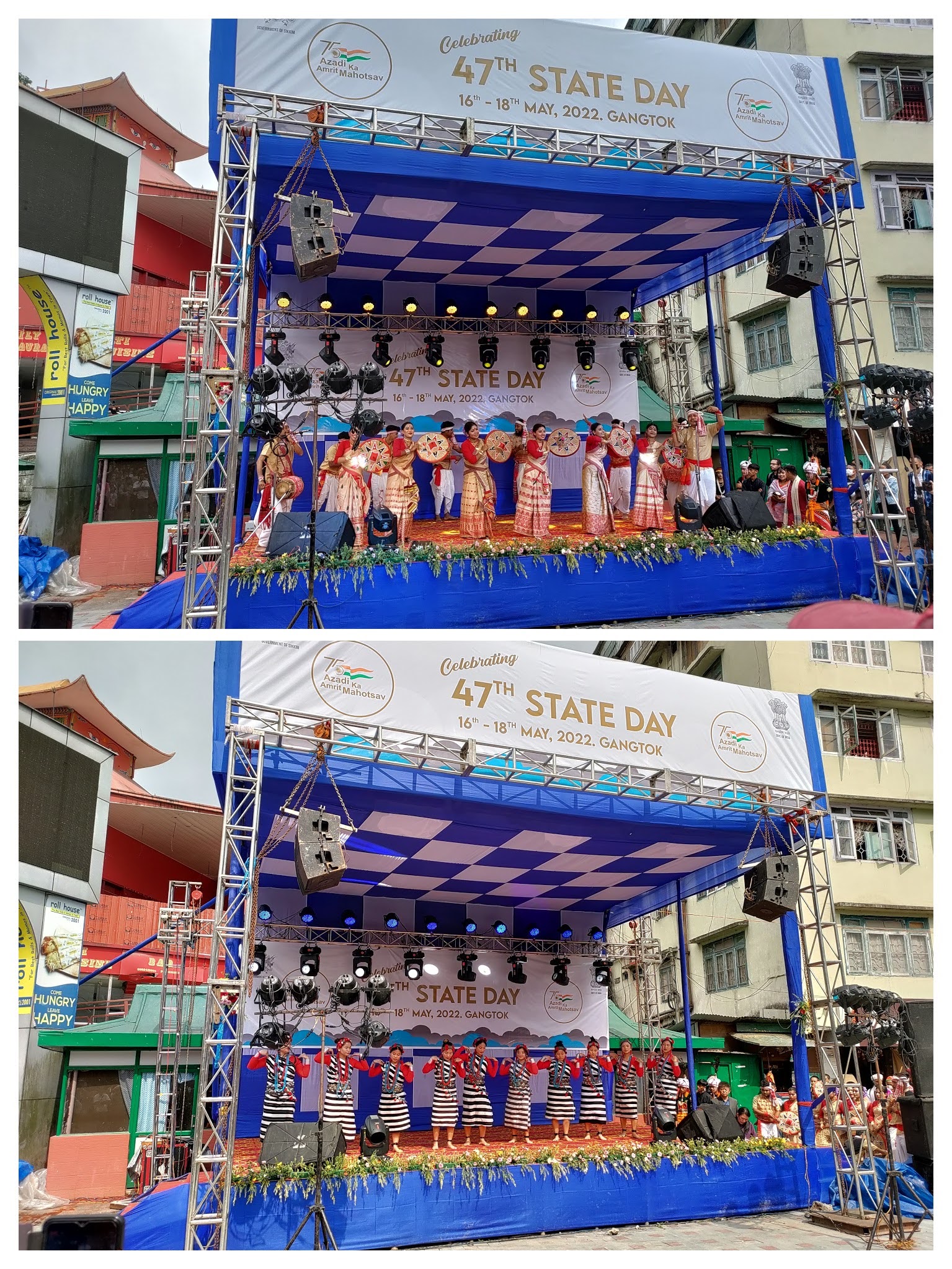 Up until that point, I had not taken a shared cab back to the hostel. I tried getting one based on whatever information I had and ended up in another part of the city, 3.5km away from the hostel. I asked around and got into another shared cab from there, but that was going back in the direction of the market so got down midway and walked back to the hostel. On the way back, I had to climb a set of steep stairs to reach a road above the hostel and then climb down near the hostel. By the time I reached the hostel, I was exhausted. After this, I made sure that I understood how to get to the hostel using shared taxis. That night, a few of us played UNO and Adulting Can Wait(a card game similar to Cards Against Humanity). It was fun.

Ranka monastery had been recommended by many blogs. Plus, it was at a scenic location. From the hostel, I got to know about Ranka taxi stand. I checked maps and made a mental note of where to get down in Ranka and how much I would have to walk. It looked like it was going to rain, but I decided to go anyway. I got into a shared cab going to Ranka village and asked the driver to drop me near Ranka monastery. That was my first 10-seater shared cab ride in Sikkim. It was a bit uncomfortable but scenic ride. It started raining heavily on the way to Ranka.

The shared cab driver dropped me near Ranka village and directed me towards a shortcut to the monastery. That path went through dense tree coverings and was a bit scary, but it ended right at the monastery. I had a windcheater, but my trackpants were fully wet when I reached. The monastery was indeed beautiful. Its front walls were adorned with beautiful wall murals. It offered magnificent views of the surrounding mountains with clouds floating around adding to the beauty. 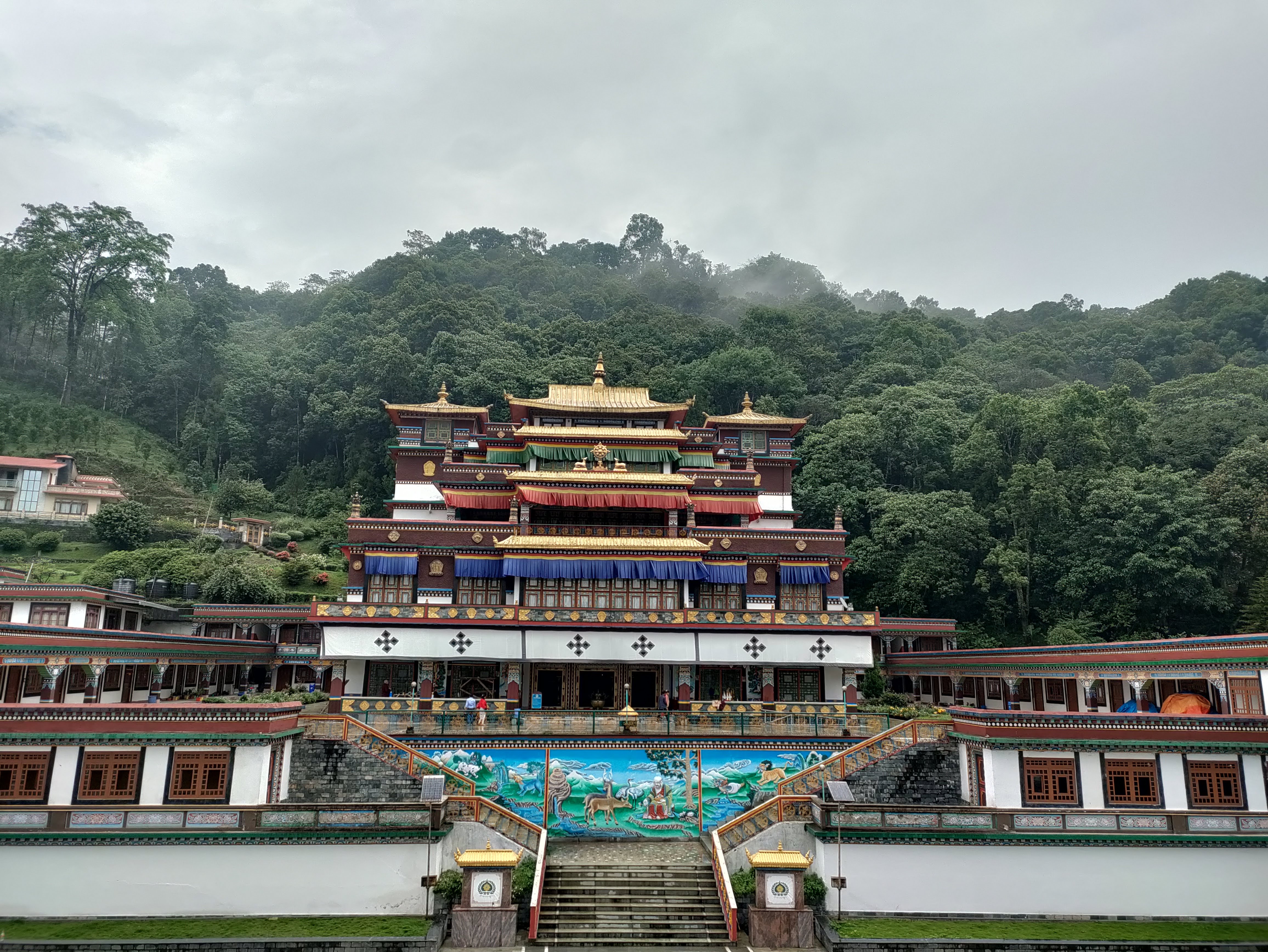 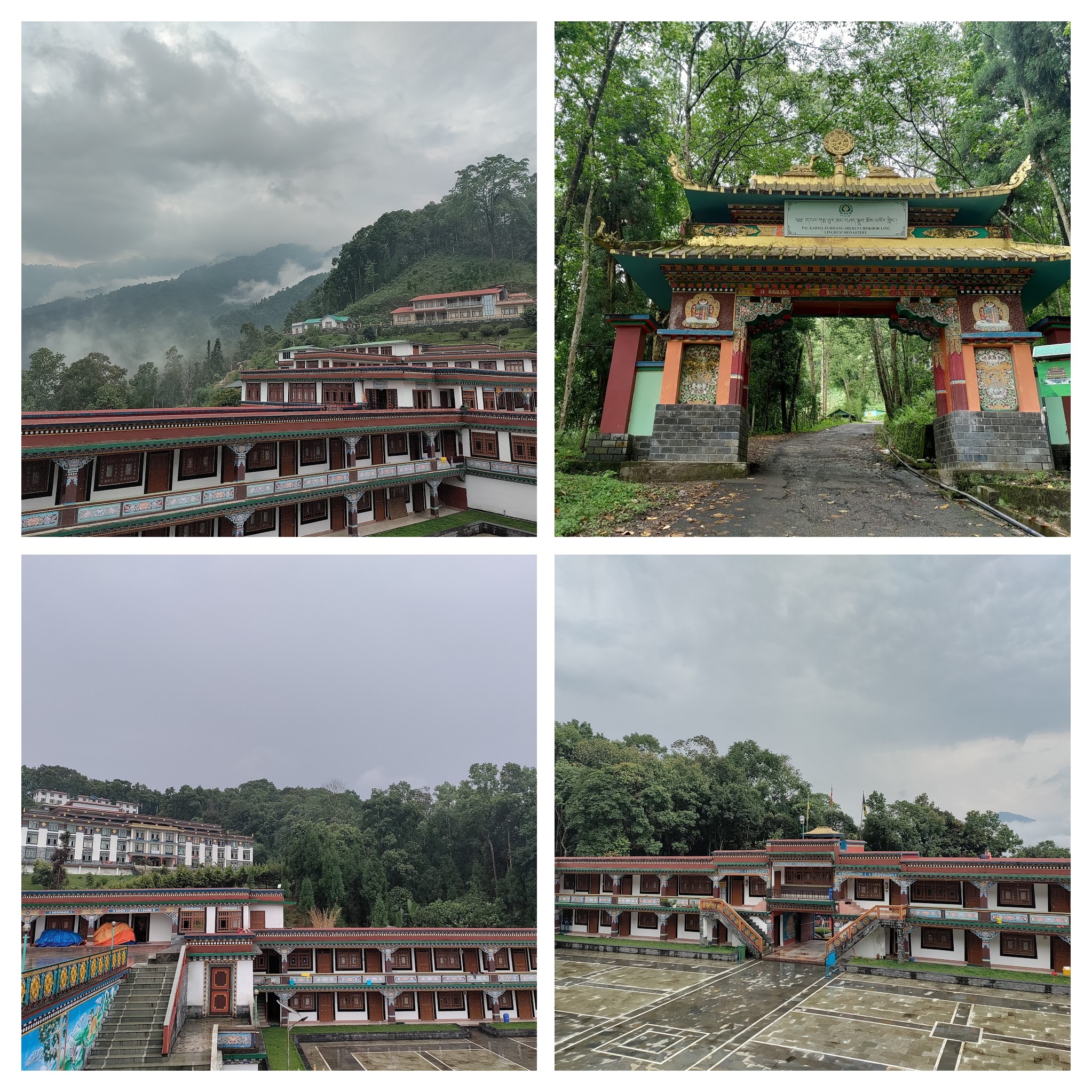 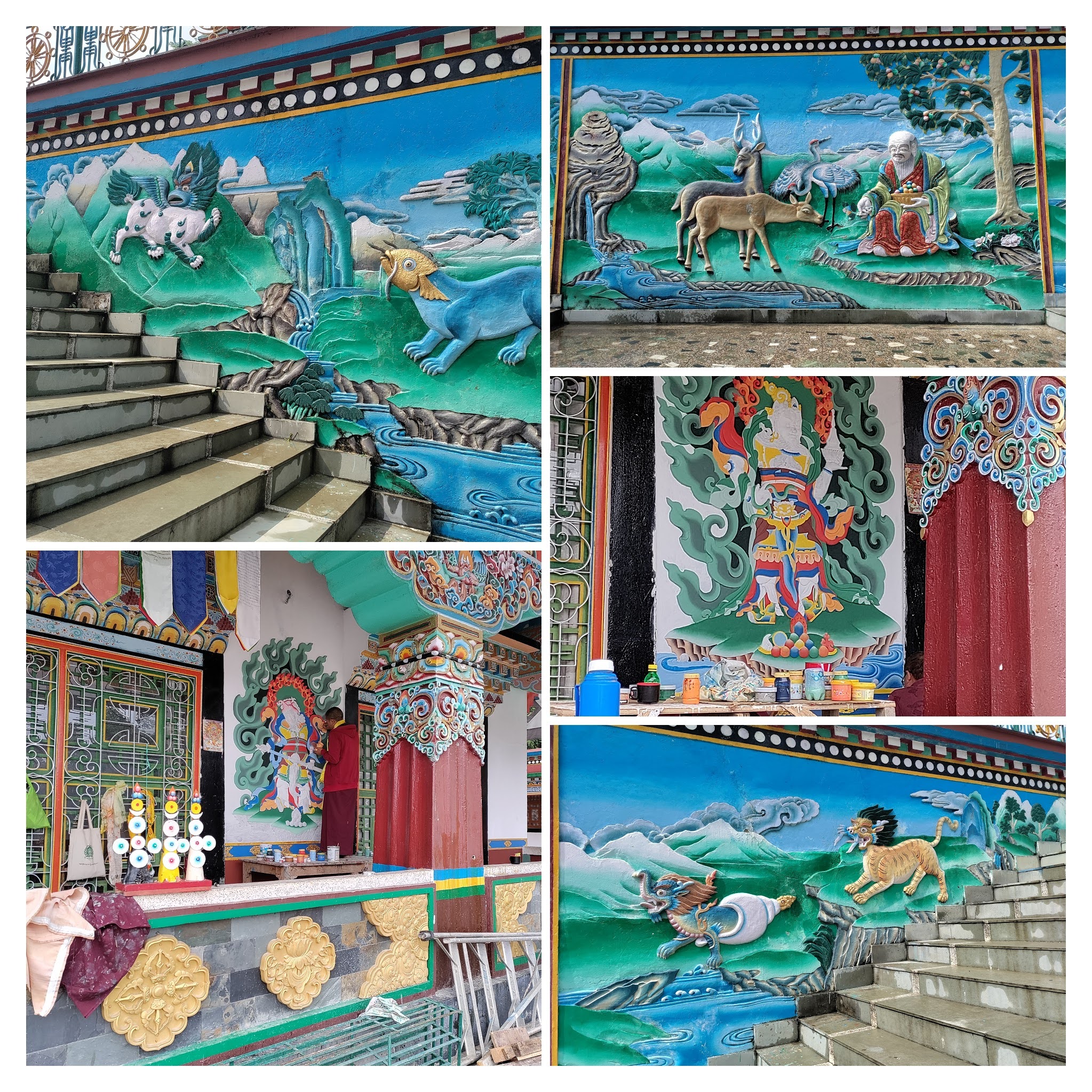 When I reached there, it was prayer time. There were a bunch of tourists, though we were not allowed to go inside the prayer hall. We stood outside and watched. Most tourists couldn’t just stand quietly and observe in peace. I waited till all of them went back. Luckily, no tourists came for the next 20-30 minutes. Those few minutes were serene. There is something in the instruments they play at monasteries during the prayers. Brings goosebumps to me.

The weather had cleared by the time the prayers finished. I had lunch at a restaurant on the monastery campus and walked back to the point from where I could get a shared cab. I flagged down a passing car which agreed to drop me at Gangtok on a shared cab fare. The return ride was also scenic, with glimpses of Gangtok city from the opposite mountains.