I had heard that it was possible to see Mt. Kanchenjunga from our hostel around 5 AM, so I set my alarm for 4:30. When I woke up, it was cloudy outside. I kept checking the weather through the window and snoozing my alarm until 5 AM, but eventually gave up and went outside to see for myself. No luck. I would repeat this routine for the duration of my stay at Pelling but the mountain remained elusive. We had decided to get up early and go out but everyone took their time to get up and get ready. We gorged on parathas at breakfast (we ate so many that the next day they put a cap on the quantity), negotiated a cab for sightseeing, and left around 10:45 AM. There were six of us - the four of us who had traveled together from Gangtok, Anwesha - who had come there from Tag Along 2.0 earlier, and Nivedha - who was doing a solo trip to Pelling (and was originally from “near” Mumbai). Nimesh, who runs the hostel, also joined us as there were no other guests.

We headed straight to Khecheopalri Lake. It was crowded. We didn’t stop near the lake though. Nimesh knew a spot which offered good view of the lake. We did a short 30 min hike to reach there. It was drizzling all the way, and there were plenty of leeches along the trail. The view from the spot was worth the hike. When we arrived, nobody was there. We bought tea/coffee from a small cafe there, and took plenty of pictures before more people came. While coming back, we took a different trail that went through a tiny settlement. There we got to sample a local fruit. On our way back, we encountered leeches again, but by that point, most of us were no longer concerned about them. We would simply pluck them off if they attached themselves to us. 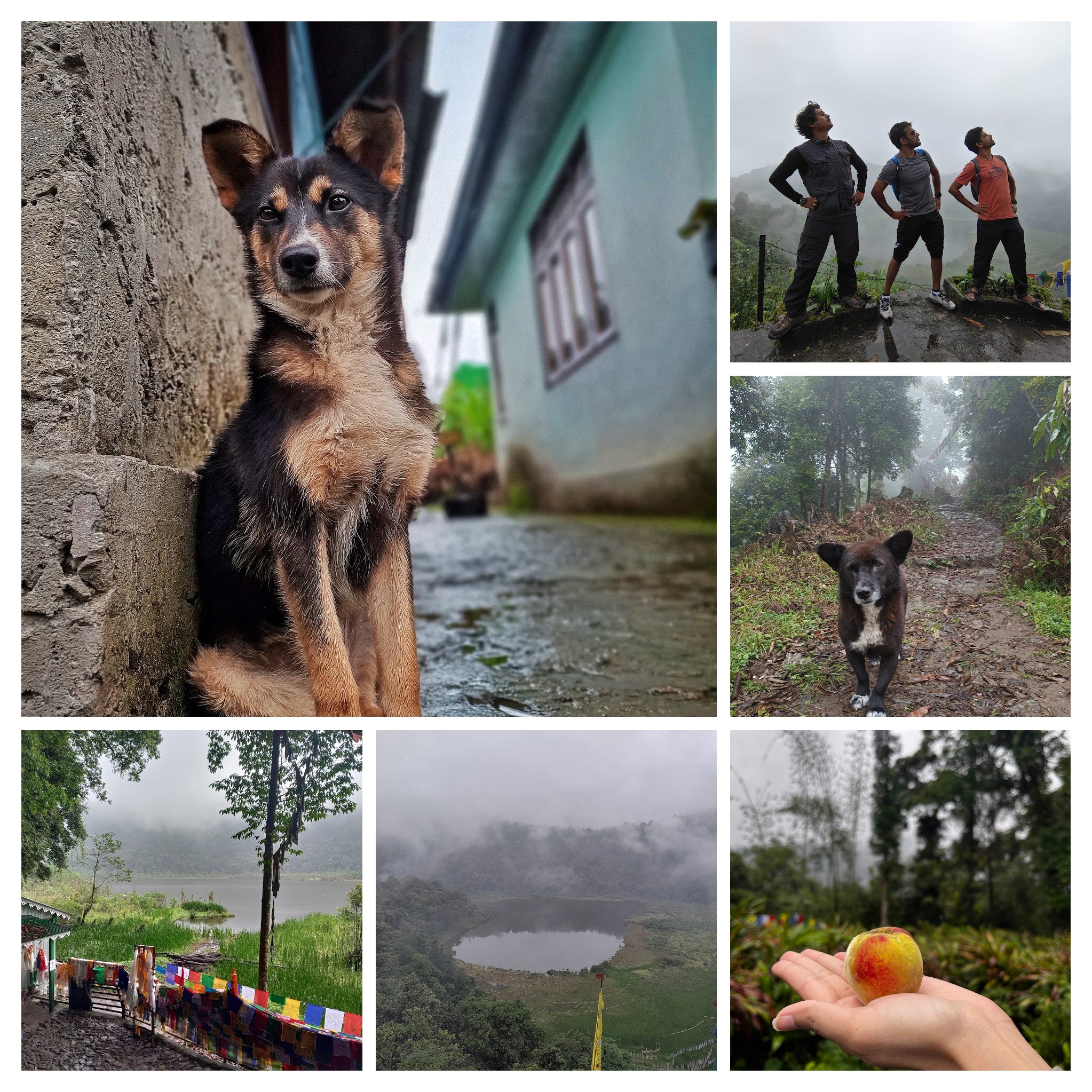 After coming down, we had the famed Latop’s Pizza. Having Pizza in this part of India sounded gimmicky, but I was in for a surprise. I am not a foodie, but even I could tell it was a great pizza. The bread was super soft, and we had it fresh, straight from the oven. It was delicious. 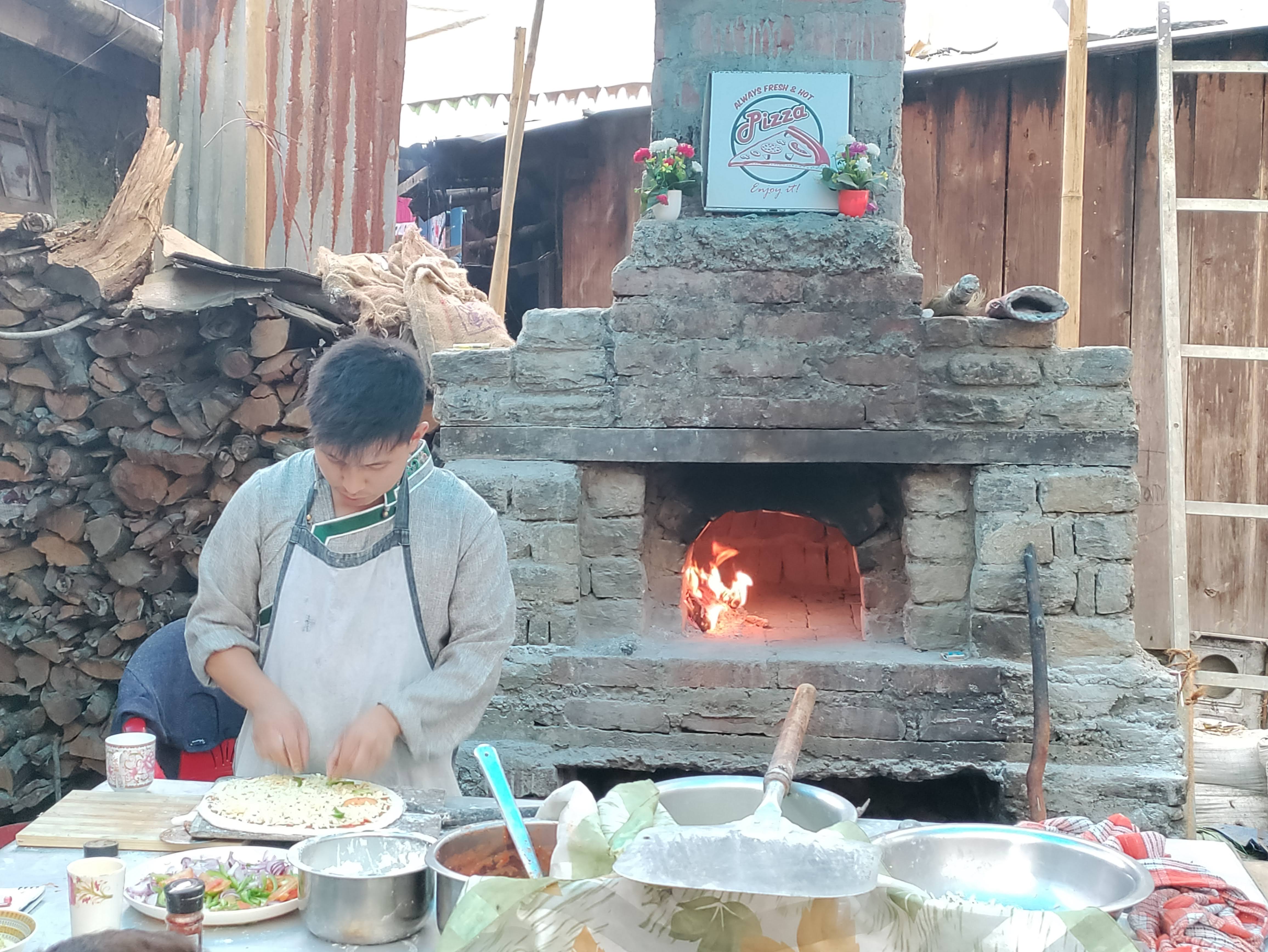 After that, we went to Kanchenjunga Falls. It wasn’t very high, but the flow had some force. Nimesh had asked us not to go beyond a wooden bridge a few feet away from the water, but slowly all of us went to the plunge pool. Since Anwesha and I were wearing floaters, we could get into the water. Seeing us in the water, Shekhar couldn’t resist. He removed his shoes and got in. He even crossed the stream and went to the plunge pool from other side. The rest of the gang followed. That side was slippery. Abhishek had a nice fall reaching there. Fortunately, he was alright. After spending a lot of time at the waterfall we returned to our vehicle fully drenched from water splashes. 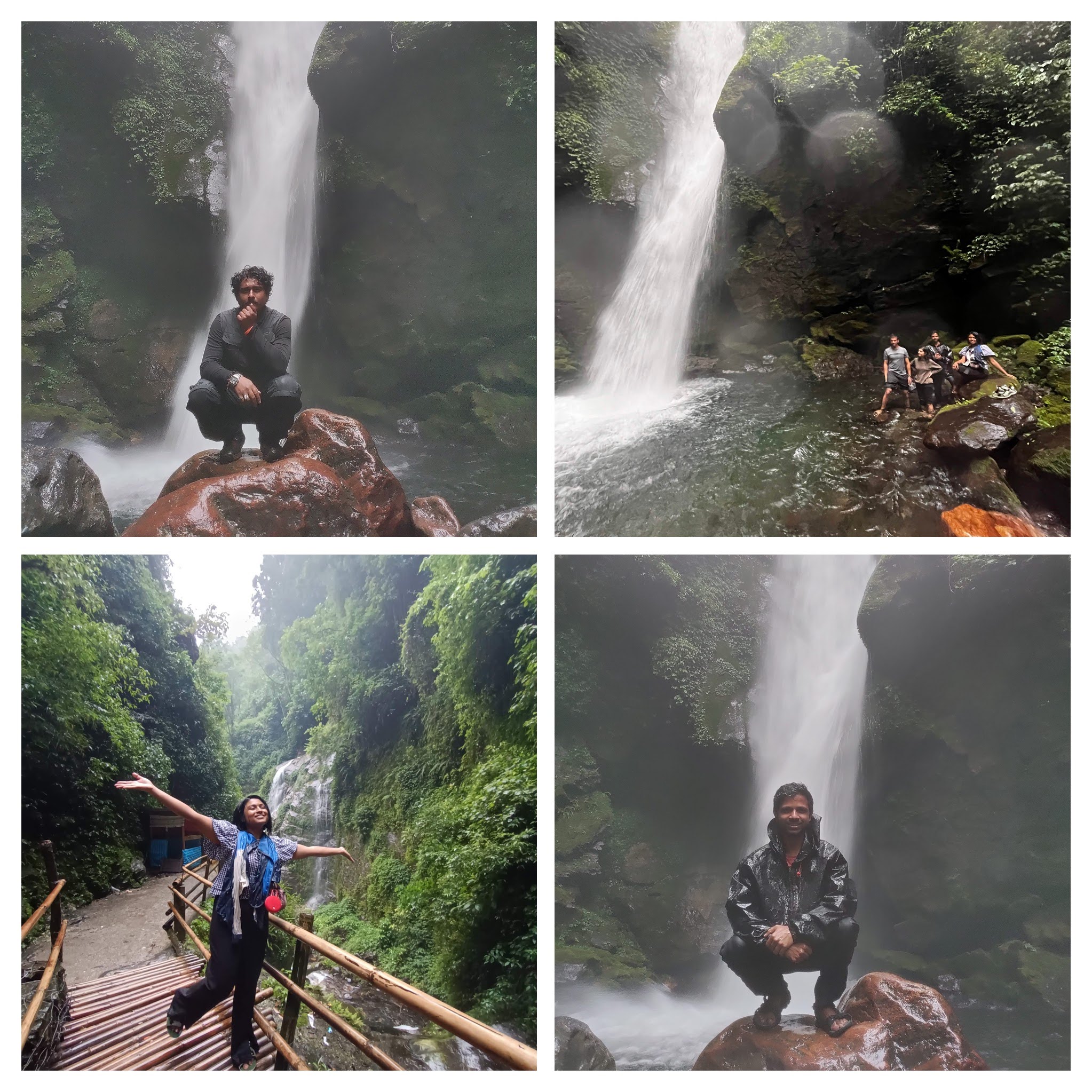 On the way back, we stopped at Rimbi, but the orange garden had closed. We were not really interested in the garden. We just wanted to go down near the river and sit there. But an old person at the gate didn’t let us in. There was another waterfall on the way back to the hostel, but we had had enough waterfalls for the day. After dinner, we had a session of dumb charades. This was more civil than the one in our North Sikkim trip but fun nonetheless.

The next day, we went on foot to see the sights around Pelling. We went to the Skywalk first because Nivedha had to leave in the afternoon, and she wanted to go there. We took the shortcut from the hostel to Pelling. It was uphill and not particularly short. We got one small cab at Pelling Circle to the Skywalk. Shekhar and I decided to walk rather than take another cab. The weather was pleasant, and the distance was only 2.1 kilometers (though uphill). We walked quickly so as not to keep others waiting too long. We cut some time by taking a trail and avoiding a hairpin bend. We arrived at the Skywalk in 25 minutes, less than what we had expected. We were sweating, but it wasn’t exhausting. The Skywalk was average and overcrowded. We climbed the stairs to get to the Giant Buddha Statue. It was far better, with fewer tourists and panoramic views (hidden by clouds). We spent quite some time there. It was getting late for Nivedha, so we took group photos and walked back to Pelling, this time avoiding all the hairpin bends. 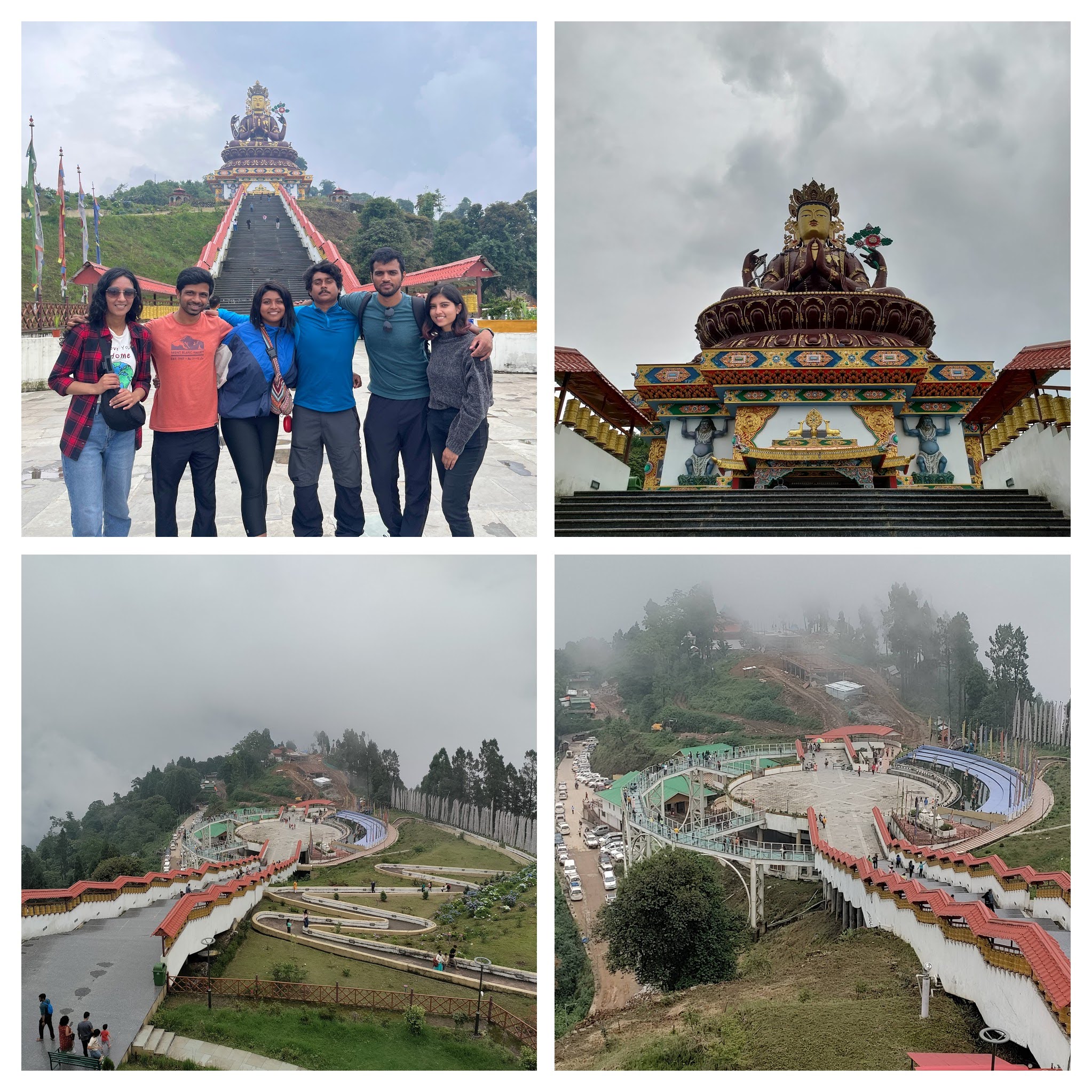 After saying our goodbyes to Nivedha, we spent some time deciding where to eat, finally settling on a local spot nearby. We had inquired about taking a taxi to Rabdentse Ruins earlier, and the taxi drivers had quoted us around 2000rs for a 2km journey, so we decided to walk. We were all walking at our own pace, and Abhishek fell behind. He decided he couldn’t walk all the way and asked for a ride. Fortunately, he noticed our hostel car approaching from the same direction. They dropped us at the bird park’s entrance. The distance seemed longer in the car. We were glad that we didn’t have to walk all the way to the ruins. We had to walk a few hundred metres through a mini forest from the gate to reach the ruins. The ruins were spread over a large area. We took our time exploring them. We had a lot of fun taking pictures in random poses. We dispersed after a while. Everyone found their own place to unwind and relax. It was peaceful after most of the tourists left. We could even see the Pemayangtse Monastery at some distance. On our way back to the gate we witnessed the skills of a budding pet photographer in our group. 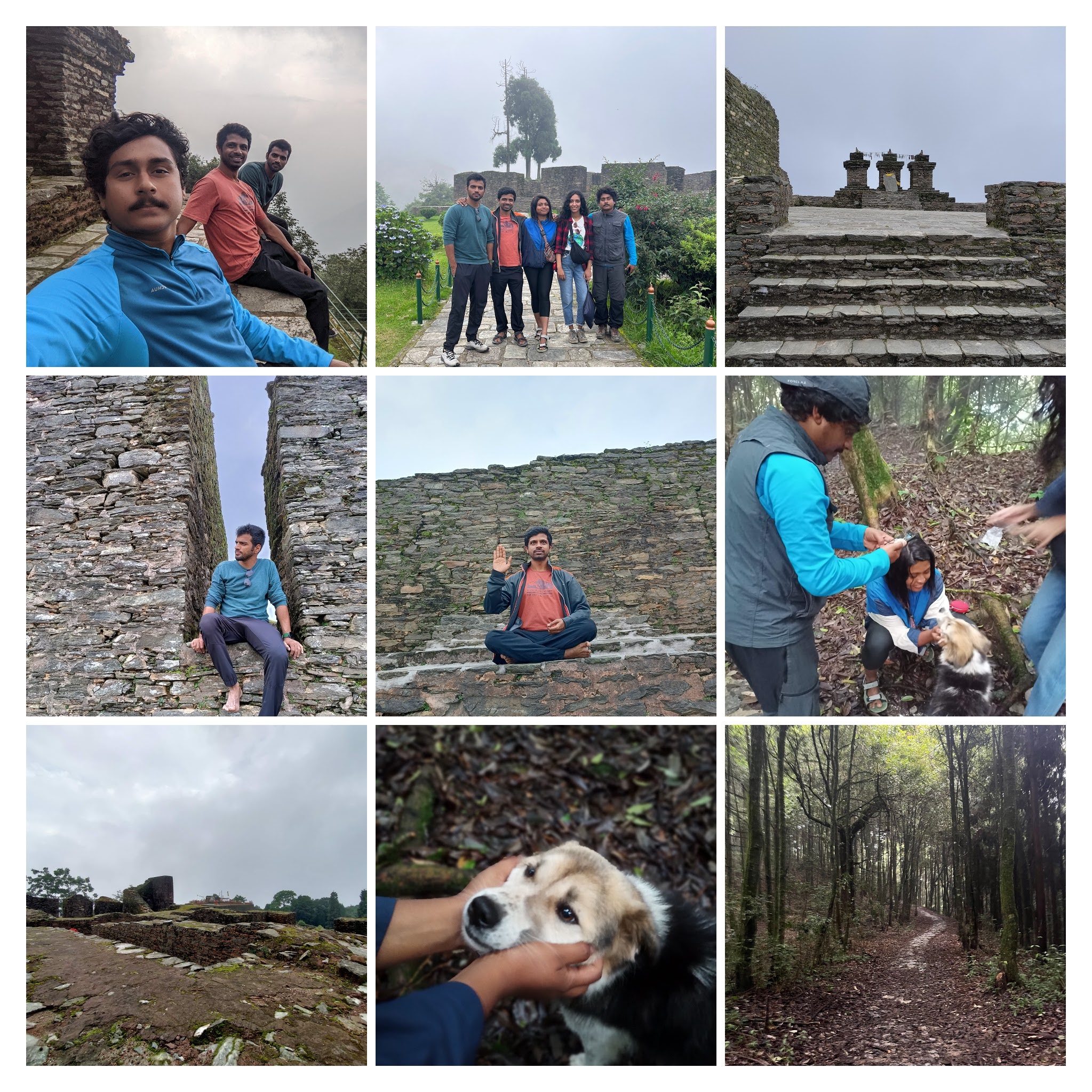 While returning, we got a lift from a shared cab going towards Pelling. It was already almost full, but somehow they made some space for us. The driver took a slight detour to deliver a package to a four-star hotel, where we noticed a pair of what appeared to be Samoyed dogs. They were beautiful. We got out of the cab at Pelling Circle and began walking back to the hostel. Our luck was good that we spotted our hostel car in lower Pelling. That saved us some walking. Abhishek had planned to cook chicken for everyone that day. He’s really good at it. We devoured it. Afterward, we hung out in the hostel’s only indoor sitting area. Shekhar and Abhishek had planned to leave for Gangtok early the next morning, so they said their goodbyes, packed their belongings and called it a day. 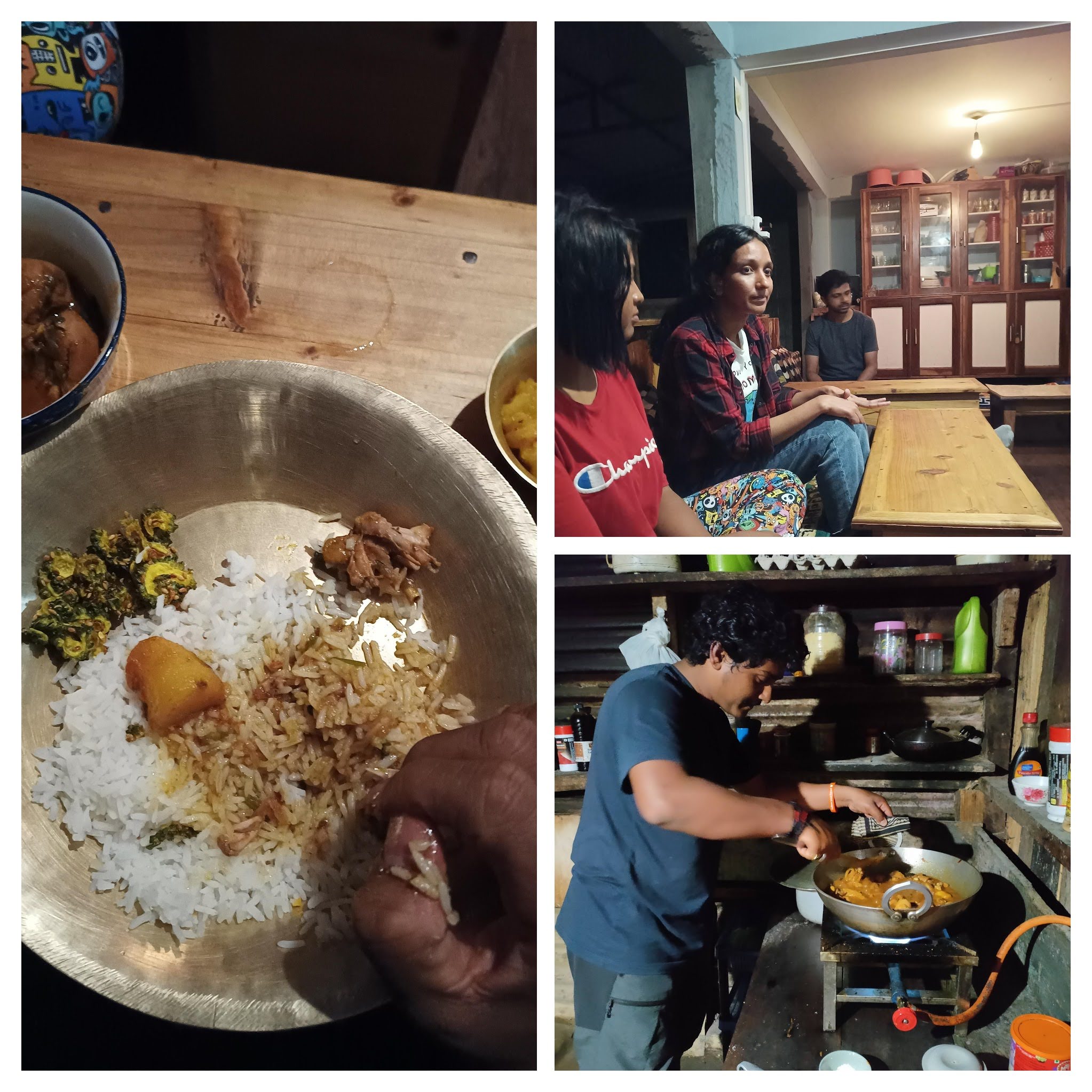 Shekhar and Abhishek left early morning. It rained all morning, ruining my plans to visit Pemyangste monastery. Maya left in the afternoon as well. Nimesh, our host, had been super chill and helpful up until this point. When Maya went to him to settle the dues, he began demanding more money for taking us to the viewpoint in Khecheopalri. And he was demanding more money than we had paid for the entire day’s trip. I told Maya that I would settle it with him later when I checked out. That was an unexpected and unjust demand, and I began to dislike the hostel. I decided to leave the next day and go to Yuksam.

In the evening I stepped out for a walk. I decided to go check out a local viewpoint. I followed a wide but slippery trail that I had seen and inquired about earlier. It went through a patch of trees and reached a small settlement. From there, it split into two paths. There was no one to ask for directions except for a kid who didn’t understand anything I said. After some guesswork, I reached the viewpoint. It was a small clearing with a wooden bench for sitting. 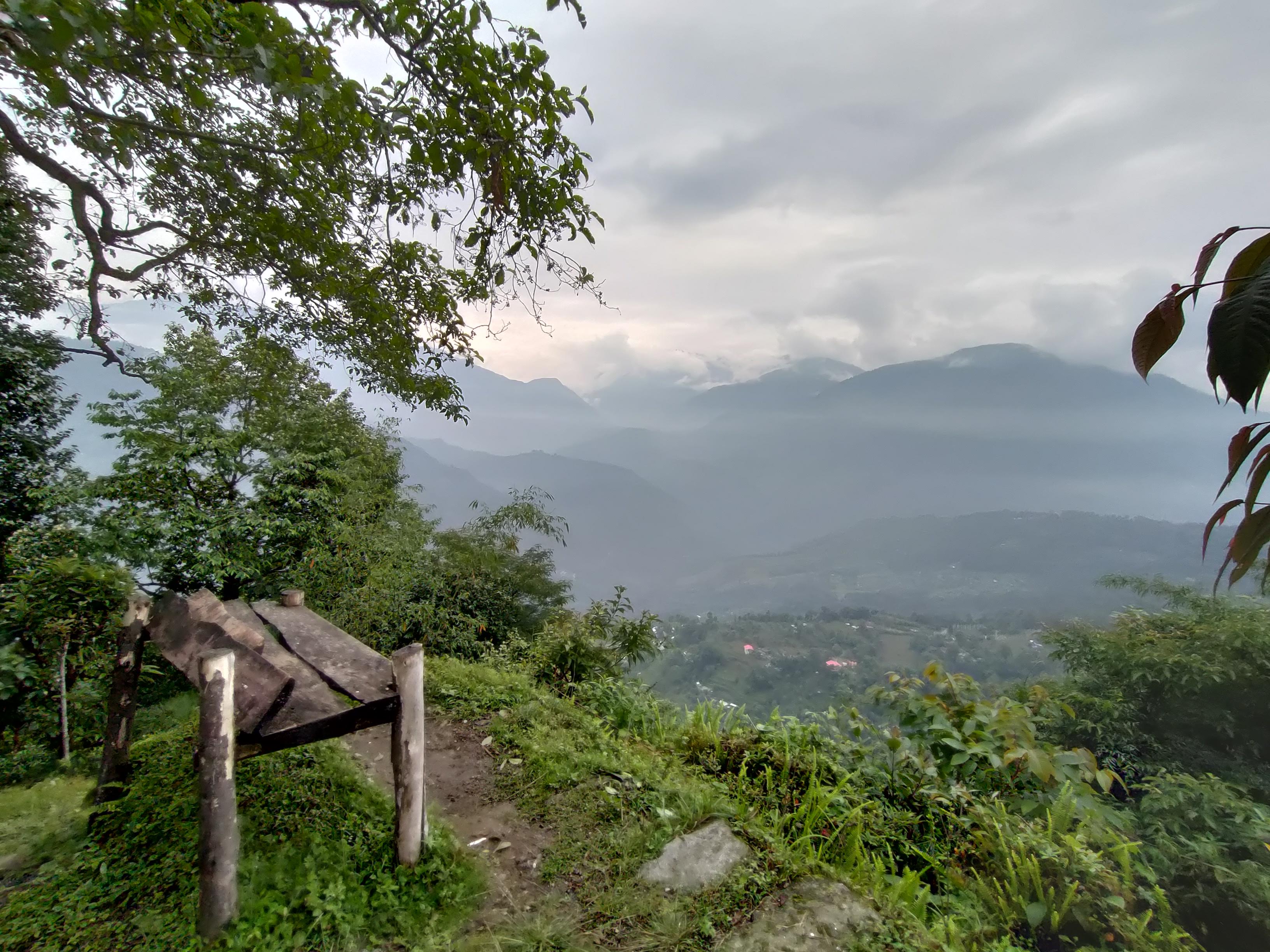 A few local girls were already there. There wasn’t much room and it was awkward just standing there waiting for them to move, so I returned to the split and waited there. When they didn’t return for a long time, I went back and checked; they had gone another way. The viewpoint provided a 180-degree view of neighboring mountains. Mt. Kanchenjunga could be seen from there on a clear day. I would have liked to stay longer, but that place was full of leeches. They irritated me after a while, so I returned. On the way back, I took a stroll. The weather was pleasant that evening.