Yuksom is small town on the edge of Kanchendzonga National Park. Many treks within the park, including the well-known Goecha La, begin there. I was looking forward to visiting Yuksom. The next day I settled my dues and left Mochilero Ostello after lunch. Thankfully, Nimesh did not demand more money, as he had done with Maya the day before. When the cab guy called to inform me that he had left from Geyzing, I bid goodbyes and left the hostel. I took the shortcut from the hostel to reach Lower Pelling. Even though they call it a shortcut, it’s an uphill walk for about a kilometer. Doing that with my laptop bag and rucksack knocked the air out of me. While I was waiting, it began to rain. Fortunately, the shared cab arrived on time, and I was able to board it before it began to rain heavily.

It rained for nearly the entire journey. When I got into the cab, I booked an Airbnb so I wouldn’t have to go homestay hunting in the rain. The Airbnb had no name; it simply stated, “Cheap and best homestay with free breakfast.” So when I arrived in Yuksom and the driver asked where I wanted to get down, I had no idea. I attempted to contact the host, but he did not answer the phone. I arrived at Karthok Lake because Airbnb showed the location there, but when I arrived, there was an abandoned building. Finally, the host answered the phone and gave me the correct directions. I had to walk back a few hundred metres because it was a few hundred metres away. Thankfully, the rain had stopped. The room was excellent. The best place I stayed in Sikkim. 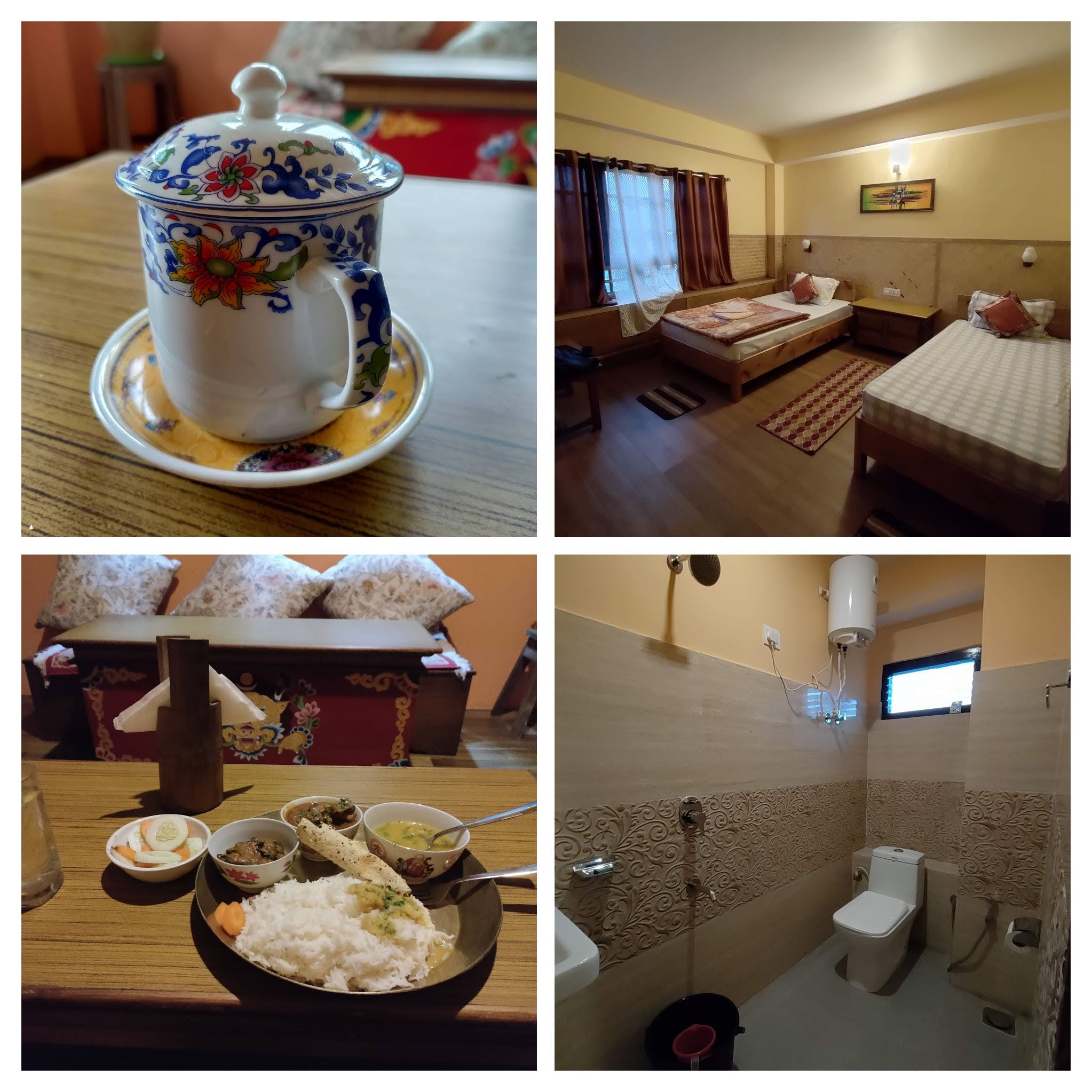 It was nearly six o’clock, but it wasn’t dark outside, so I freshened up and went out to explore Yuksom. I decided to go till the point where the road ended. Beyond that, it was all Khangchendzonga National Park. There was a helipad at the end, according to maps. It was a good stroll. There were barely any vehicles on the road. And after Kathok lake, there were not many houses till the helipad colony. The final few meters to the helipad had big imposing mountains on three sides and a plateau-like area on the fourth. In the distance, you could see the lights of Pelling city. The Rathong Chuu River flows from near Yuksom. I couldn’t see it because of the dense forest between the helipad and the river, but I could hear it. There were a couple of big waterfalls on a mountain on the other side of the river. It was lovely and very peaceful. I stayed there until it was nearly dark. The stretch of road with no houses on the way back was a little frightening. There were no streetlights either, so I had to use my phone’s flashlight. 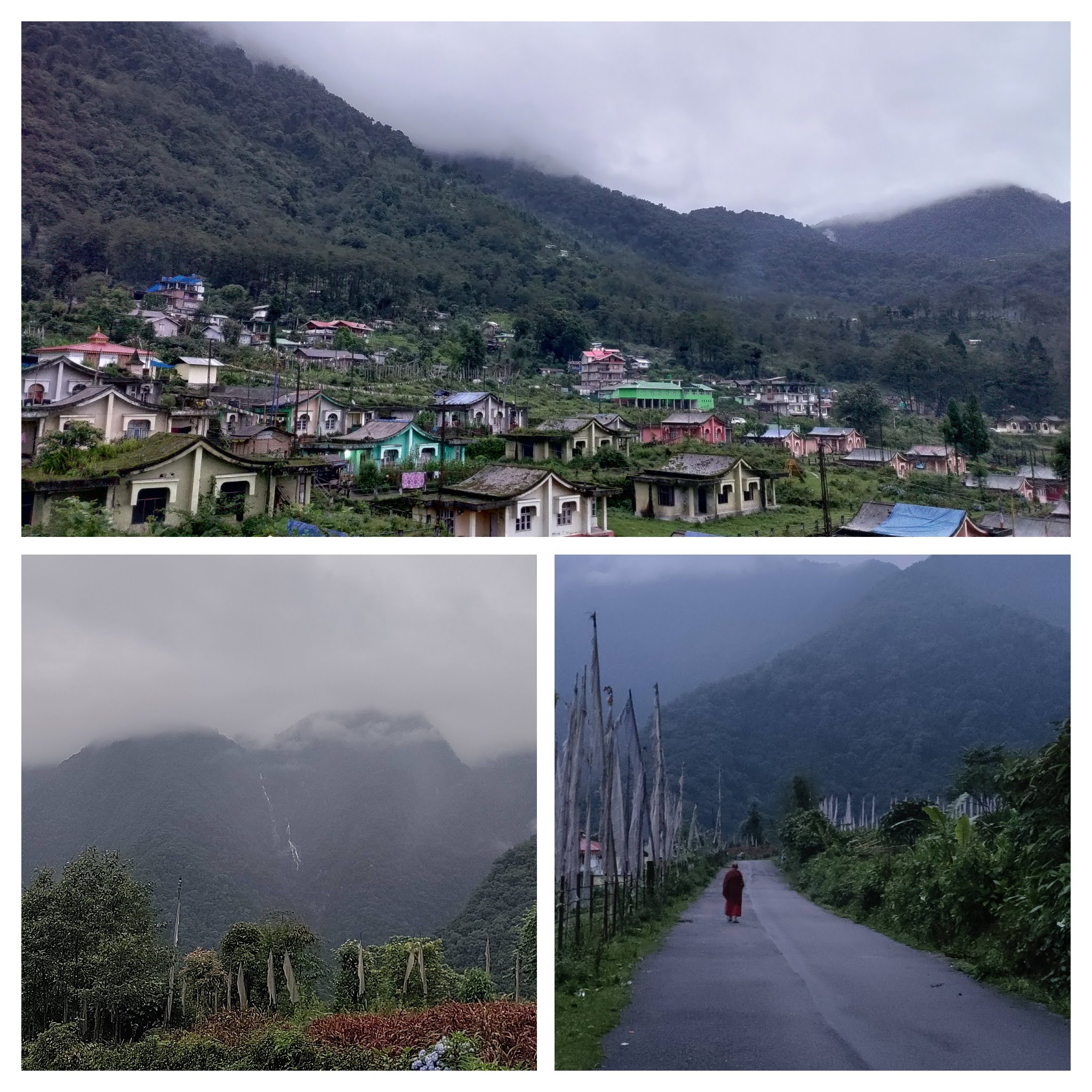 Because the rooms resembled those of a 3-star hotel, I was concerned that the dinner would be geared toward tourists, but that was not the case. The food was delicious and home-cooked - local chicken and vegetables from the garden. The hosts served the dinner in a room inside their house. I met a couple of other guests who were staying in the homestay. We had an odd conversation that started with hobbies and ended with the guy telling me about Plato’s work. After a day of walking and a satisfying meal, I was ready to drift off to sleep quickly.

The next morning, I got up early. Since it wasn’t raining and there was still time for breakfast, I decided to go sightseeing. I wandered through Yuksom town, arriving at the Coronation Throne. It was too early. The ticket counter was closed, but the complex was open. Some monks were praying in a small monastery inside the complex. There was a small football field behind the complex and a few houses in the distance. This was also close to the river, so I looked for trails that led to the river but couldn’t find any. I wandered around the complex, listening to the prayers in the background. On my way back, I stopped by the Yuksom Temple, which had giant prayer wheels. 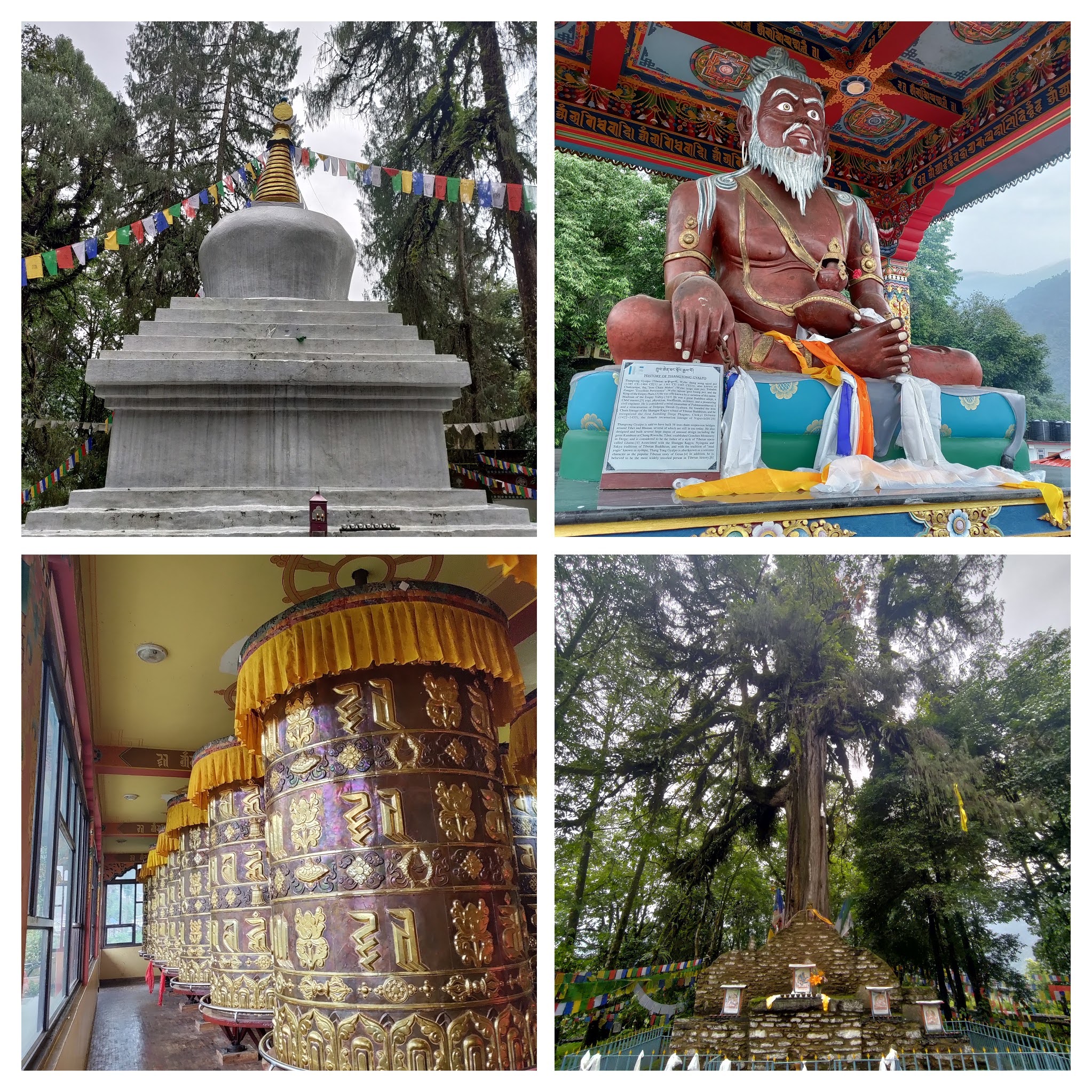 I went out again after breakfast to see Kathok Monastery and Kathok Lake. The Monastery had been closed. It had begun to rain by the time I arrived at the lake. Despite the leeches, I spent some time there before returning to the homestay. Because I hadn’t booked for two days, I had to settle for a shared room. I considered going to Dubdi Monastery, but the rain refused to stop, so I ditched that plan. I returned to Yuksom town in search of food. Because it was the off-season, most places were closed. Finally found a restaurant that only served momos. 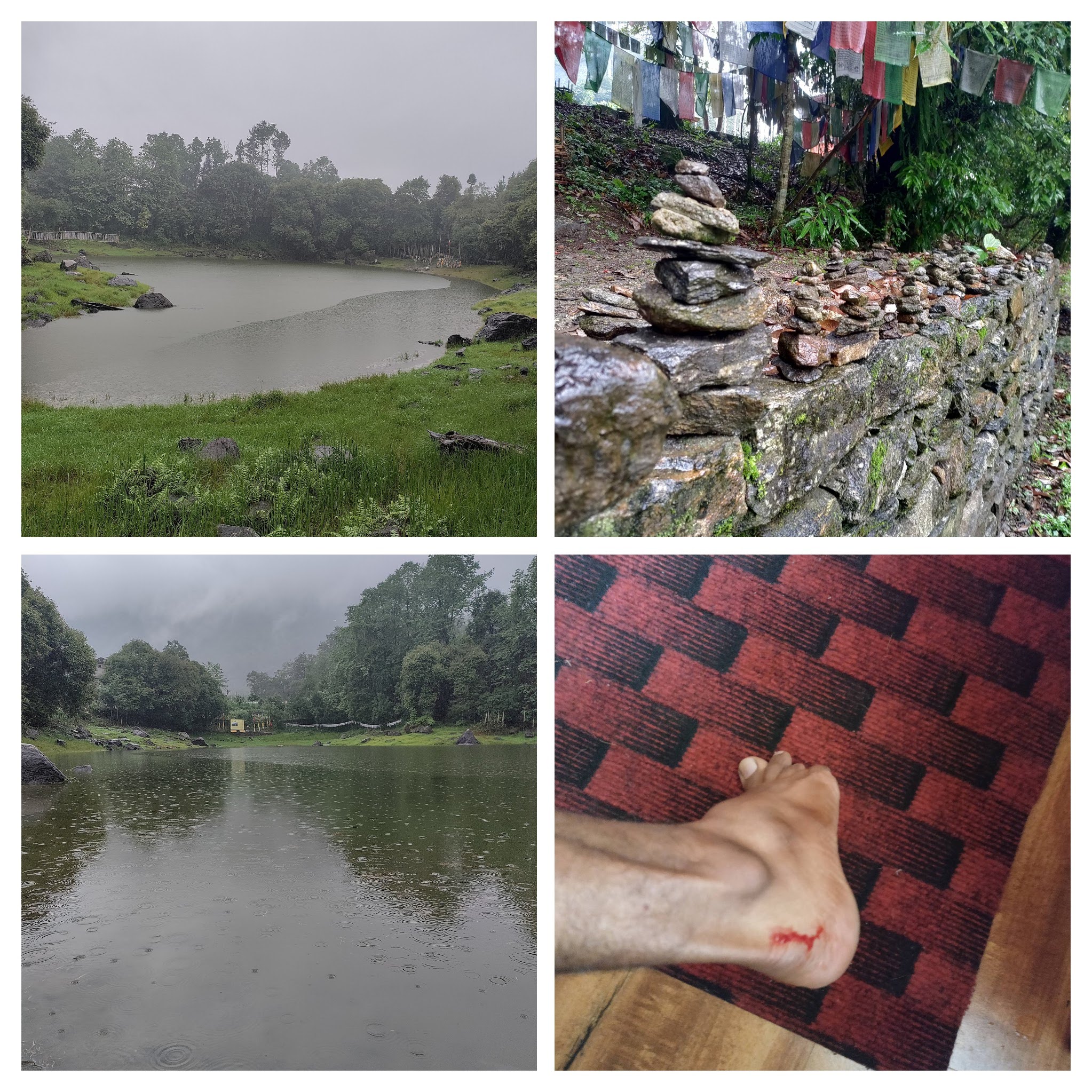 There was an uphill path from town that appeared to lead to a monastery. I went up, but it was also closed. It had been raining the entire time, so I returned to the homestay. I ate a packet of Parle G before heading out to the helipad in the evening. I called the cab driver in the evening to reserve a seat until Geyzing for the next day, but he had work the next day and couldn’t go. He gave me the contact information for another driver, who confirmed that he had a seat available. Dinner was a simple affair. The lady in the family struck up a conversation with me, telling me about her family and her daily routine. Since I was going to leave early morning, I settled the dues and packed my bags. Although it wasn’t the ideal time to travel to Yuksom, I enjoyed the serenity of a tiny town. Without a doubt, I would visit Yuksom again for Goecha La.