I was woken up very early by a call from the shared cab driver. He had called to inform me that the shared cab was full and that I should make other arrangements. It looked like I would either have to extend my stay by a day or hire a private cab to Pelling. I decided to try my luck and got ready. Before leaving, I explained the situation to the host. He and his brother tried calling all the shared cab drivers to get a seat for me. There were three shared cabs from Yuksam to Geyzing. One was booked to ferry local kids to some exam, one’s driver was sick, and the third and the only one was already full. The host asked me to go to the market and see if I could get a shared cab. If I didn’t, they would have a place for me when I returned. His brother also called the driver requesting him to make some space for me. Finally, the driver agreed to take me in the cab.It was a regular Sumo with over 15 people crammed into it. Some locals had to sit on other people’s laps. I was in one corner in the last row. It was a bit uncomfortable, but I was happy to have got a place.

We reached Geyzing stand around 10:30. Geyzing has the largest taxi stand in the area. From there, shared taxis run to all major towns in Sikkim and northern West Bengal. The next cab to Ravangla was at 11.45. I bought a ticket and went around and had breakfast. When I returned to the cab, the driver was nowhere to be found. He came sometime after 11.45, and we started towards Ravangla in a drizzle. The ride was all uphill as we had to go from 2700ft(Geyzing) to almost 8000ft(Ravangla). After crossing Legship, the visibility was very low but you could sense that there was a deep valley on one side. We saw many signs of landslides along the road. 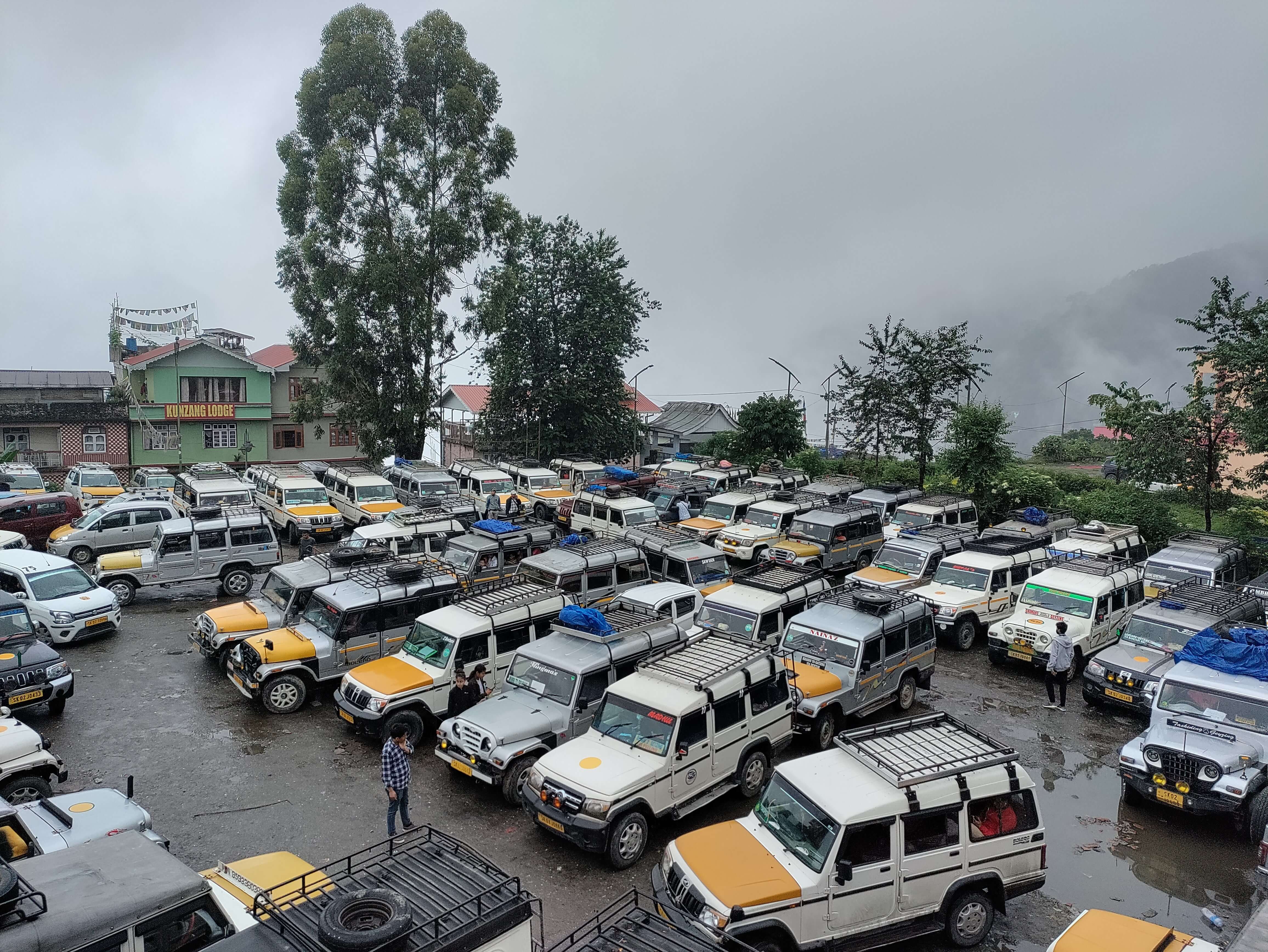 We reached Ravngla at around 2 PM. The visibility was so poor that you could only see a few meters ahead. Ravangla was noticeably colder as well. I walked one km uphill to reach my Airbnb. The walk felt a lot longer with all the luggage. I had lunch there and set out to explore. I went straight to Buddha Park. I unknowingly entered from an open gate that was not meant for tourists. Saved me a few hundred meters of walk and an entry fee. The weather had also cleared up a bit, and I could clearly see the entire Buddha Statue. Under the statue, there was a museum that had beautiful wall murals depicting various scenes in Buddha’s life. A circular path went up to the base of the statue and along the path, there were display boards explaining Buddha’s journey. On the ground floor, there were mattresses for people to sit and meditate. Though it was hard to do with people talking loudly all around you.

After a while, clouds came back and I couldn’t even see the entire park. The buddha park is huge. Ravangla Gumba is outside the park but right next to it. When I went there, it was shut. I observed a local moving down a trail. Google Maps’ aerial view indicated that it went to Ravangla market. I followed the trail and encountered the local who confirmed that the path indeed went to the market. It was a shortcut. I roamed around in the market and came back up to the Airbnb, finishing a circuit. It was dark and while on the way up I could see the Buddha statue lit up. While the dinner at the Airbnb was being prepared, I went back up to take a look. 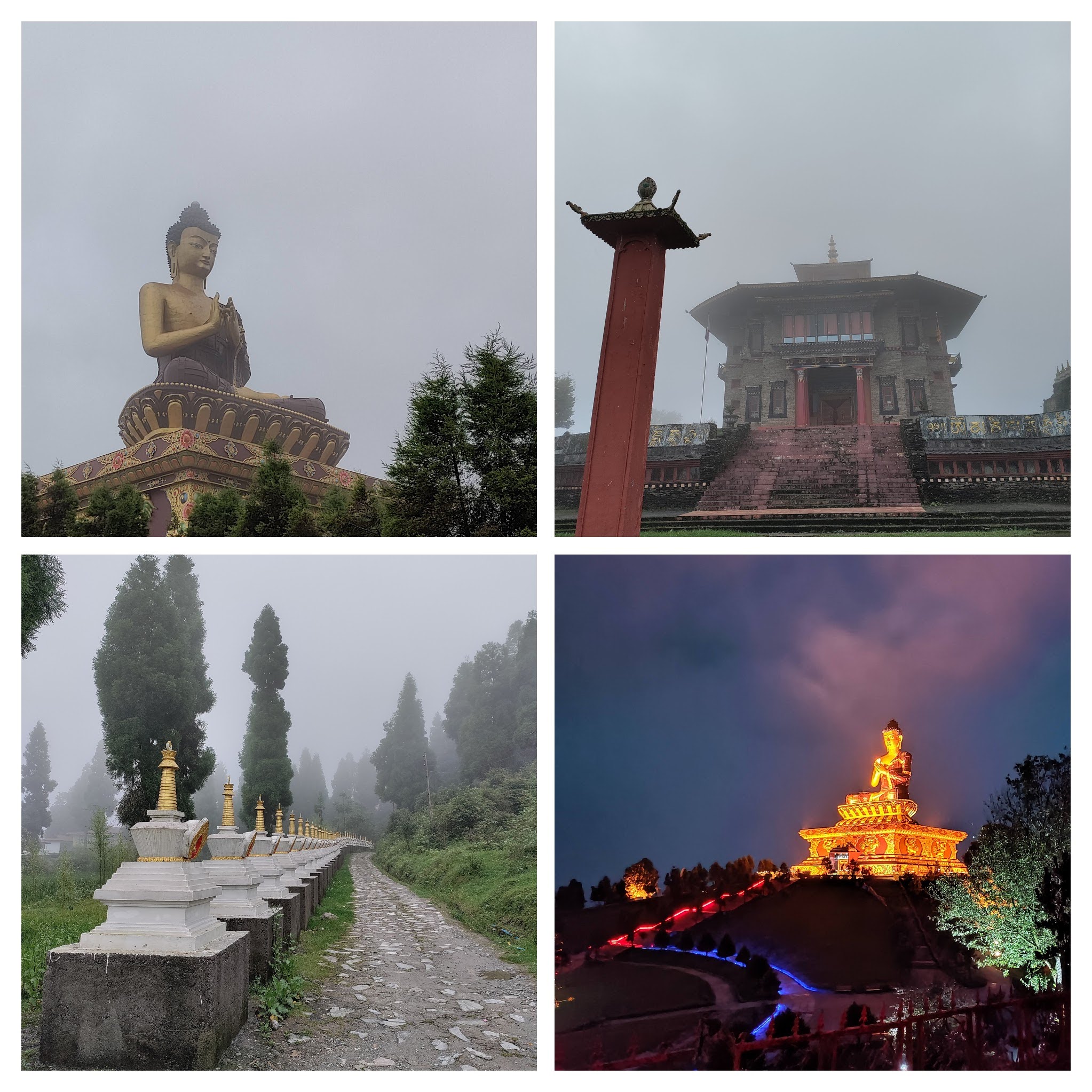 The following day passed quite quietly. I woke up late. After much analysis paralysis, I went down to the market, had breakfast at two different locations, and then slept all afternoon. The caretaker of the guest house had told me that there were no shared cabs for Ralong monastery. But he wasn’t a local, so I doubted that. In the market, I saw a shared cab to Borong, route to which goes from near the monastery, but I didn’t feel like going through all that trouble. In the evening there was some trouble with the Geyser and I ended up reading a lot of North to Paradise and eventually taking a quick bath with cold water.

I left at around 7 to go to the market. It was already dark and there were no streetlights in some stretches. Most of the shops in the market were closed as well. I had my last meal at Taste of Sikkim. The chicken was surprisingly good. It had already begun to drizzle as I finished eating and turned around to go back. It was a spooky uphill walk. All the shops were closed. It wasn’t unsafe because there were houses along the road and I was in Sikkim. My only worry was stray dogs. There were a lot of them on the way. But fortunately, because of the drizzle (and maybe because of the cold), not many were roaming around.

Back to the plains

I took Sikkim Nationalised Transport’s early morning bus to Siliguri. It was slower than the shared cabs but much more comfortable and cheaper. As the bus descended from Ravangla, I tried to soak in the views as much as possible. It would be a while before I would be back in those mountains again. We passed through Namchi. I was glad that I had decided not to go there. It was just a city with replicas of Char Dham being its main attraction. The bus reached Siliguri at around 11:30. I walked a kilometer to the hotel room I had reserved from the bus stand. Probably should have taken a cycle rickshaw, but old habits die hard.

Figuring out what to eat in Siliguri was easy. I was in West Bengal and had to eat fish. I found a local restaurant nearby that served fish thali. I had half a day to roam around, and Iskcon Siliguri was one of the top attractions, so I went there. It was quite disappointing. The garden was only there for aesthetic purposes, and it was far too crowded. I decided to go to Surya Sen Park and spend the evening there. I couldn’t find any rick so started walking towards it. Good thing I walked because I spotted a Ferris wheel along the way. There was some Baishaki Mela. I couldn’t resist the temptation so bought an entry ticket and went in. It was sunset time. The Ferris wheel offered good views from the top. After eating a bit in the mela I moved towards Surya Sen Park, taking the inner lanes of Siliguri. I was late, and the park was almost closed. I went a little ahead and spent some time on the banks of the Mahananda river. 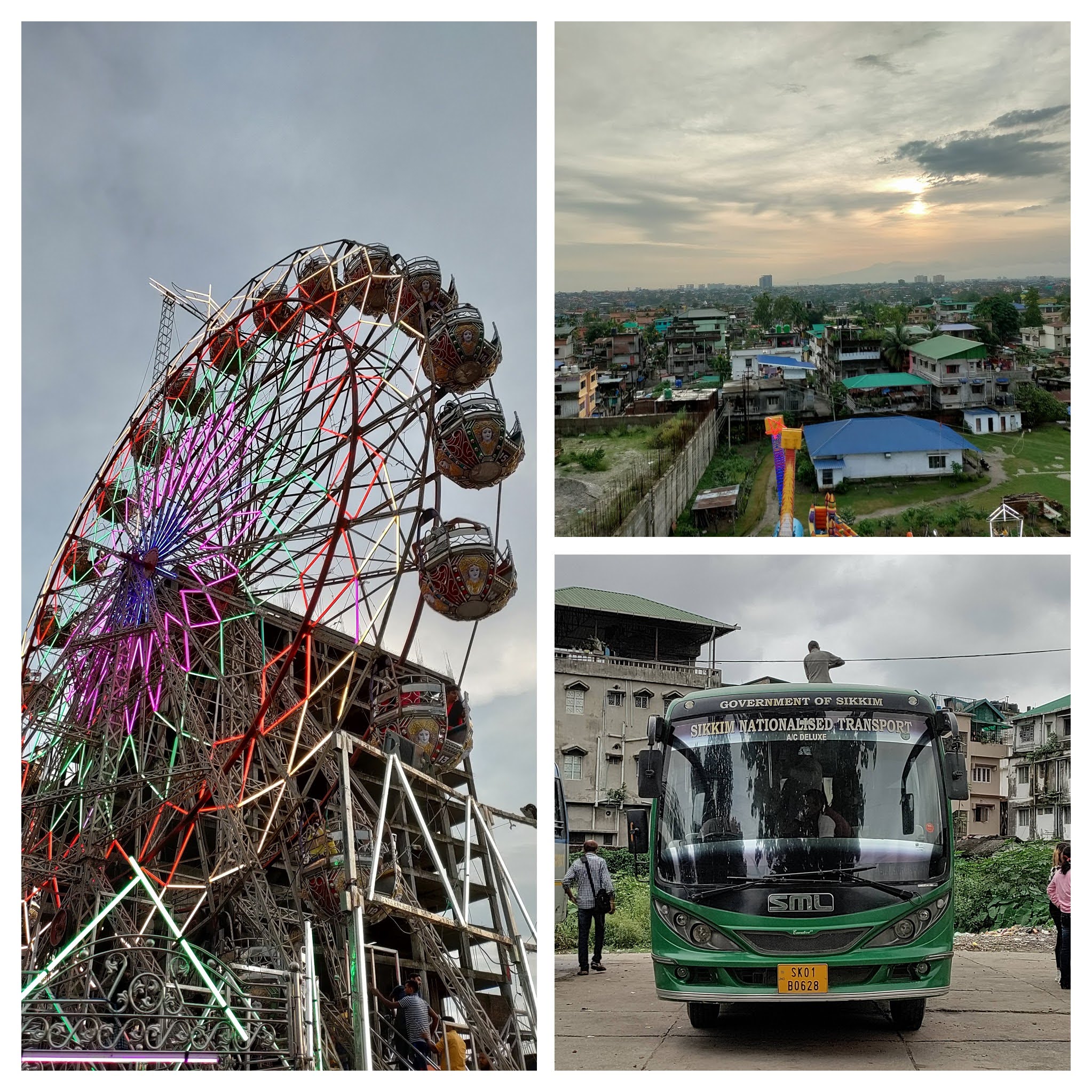 Finding a place for dinner proved to be a task. It was Sunday, so most of the popular places were full. After walking by a few restaurants, I ended up having dinner at the same place I had lunch. But that was good. I needed to replenish my emergency supply of Parle G, so after dinner, I set out to buy one. While returning, I checked for ice cream places and decided to try a Kulfi place. They didn’t have the typical kulfi, and since I have trouble choosing food, I ultimately had an Imli Kulfi. I decided not to experiment more and returned to the hotel. It had been a long day. I had walked everywhere except for the bus ride in the morning. I could feel it in my legs. The trip had come to an end, and I was pleased with how it had turned out. 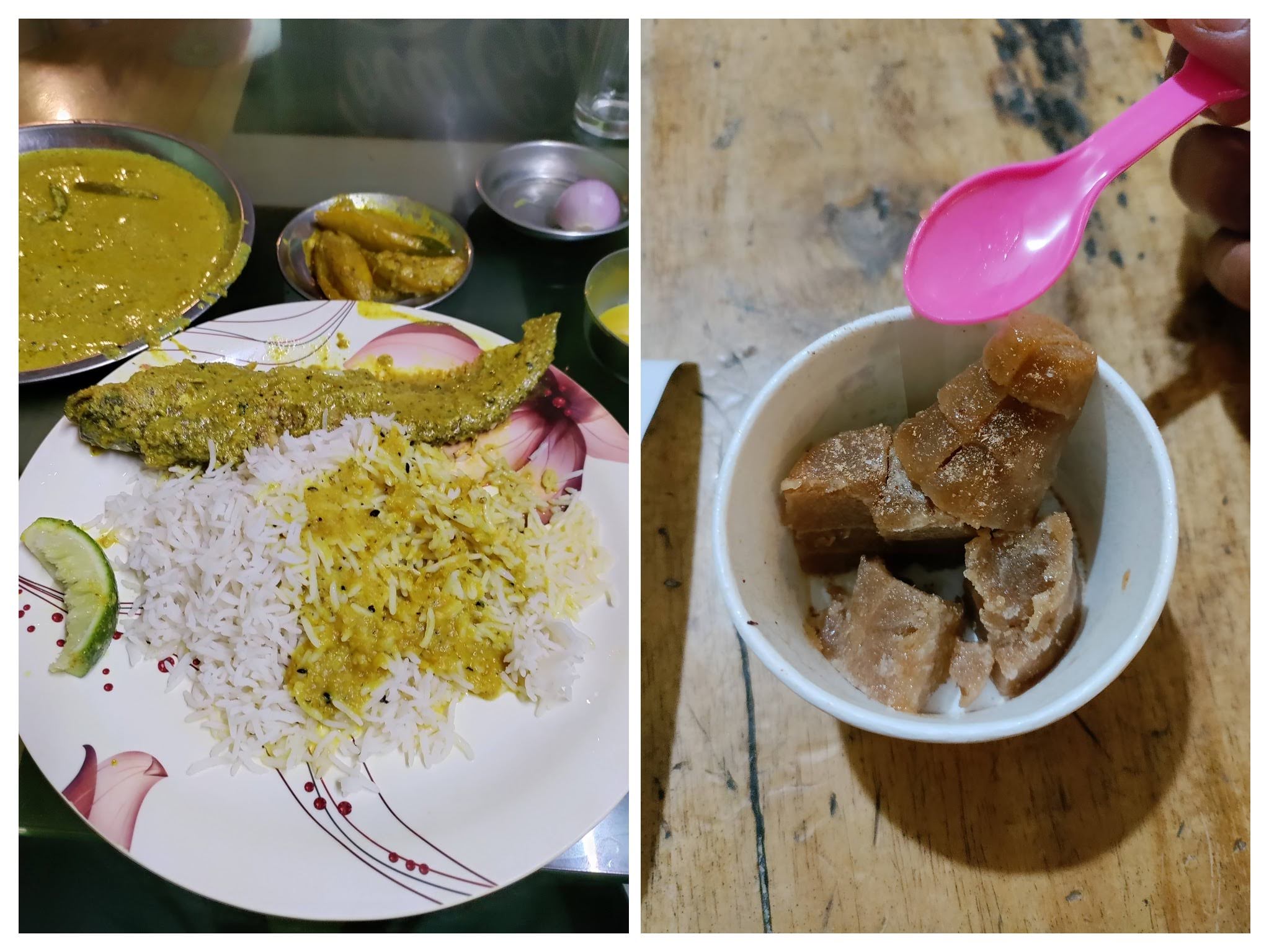